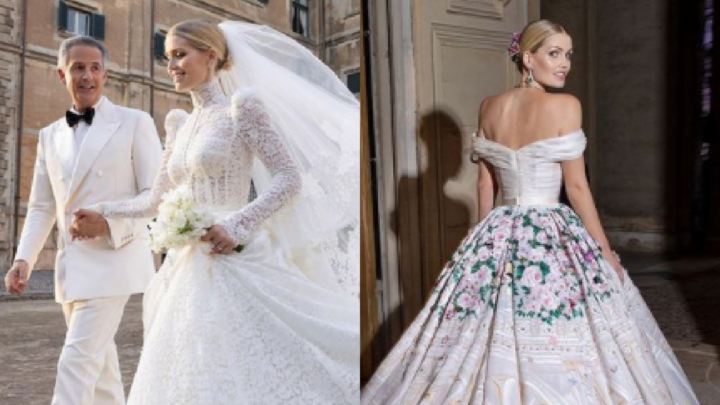 For the ceremony, Kitty wore a Victorian-inspired white lace Dolce & Gabbana gown, which featured an elegant high neck design, puff sleeves, a fitted bodice and an A-line skirt. The 30-year-old also wore four other couture gowns on the big day.

One of the new photos shows Kitty and Michael, who was dressed in an all-white tuxedo, walking hand-in-hand in the villa’s grounds, while a second pic shows off the back of Kitty’s magnificent dress. The third is a stunning close-up of Kitty.

It comes as Dolce & Gabbana uploaded a new video of the fashion model’s five wedding looks. One of these looks included a strapless blue tulle gown embroidered with pink flowers. The video also included a snap of a hand-painted silk gown embellished with flowers and crystals and a gold and fitted evening gown.

Kitty, who was born in the UK but raised in South Africa, is the eldest of five children and her parents are Charles Spencer, the younger brother of the Princess of Wales, and former British model Victoria Aitken.

Despite being raised overseas, she remains close to her cousins Prince William and Prince Harry and famously attended the wedding of the Duke and Duchess of Sussex in 2018.

Her twin sisters, Eliza and Amelia, were in attendance for her big day, as well as her brothers Louis Spencer, Viscount Althorp and Samuel Aitken, who walked her down the aisle. It does not appear that either Prince William or Prince Harry and their respective partners attended the nuptials.

What do you think of Kitty Spencer's dresses? Do you like the photos?