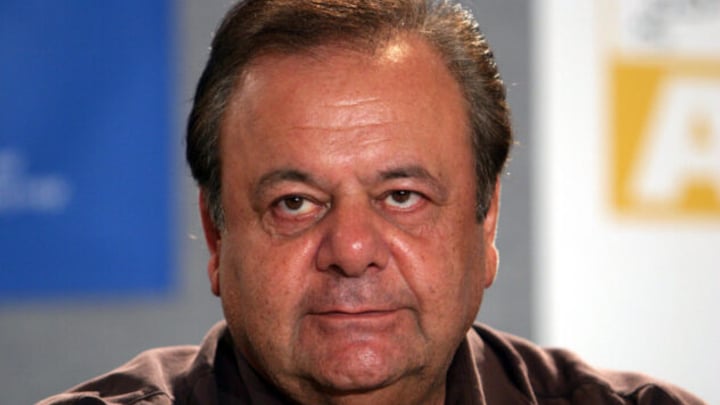 Sorvino's most notable role was mobster Paul Cicero, who had a passion for cooking, in Martin Scorcese's Goodfellas in 1990. Source: Getty Images.

Hollywood is mourning yet another acting legend after Paul Sorvino, best known as mobster Paulie Cicero in Goodfellas, passed away at the age of 83 on Monday, July 25.

Sorvino’s publicist Roger Neal said the actor died at the Mayo Clinic in Jacksonville, Florida of natural causes with his wife Dee Dee reportedly by his side. Dee Dee issued a statement following her beloved husband’s passing.

“Our hearts are broken, there will never be another Paul Sorvino, he was the love of my life and one of the greatest performers to ever grace the screen and stage,” she said.

Sorvino’s daughter, fellow actress Mira Sorvino, took to Twitter to express her grief over the “most wonderful father”.

My father the great Paul Sorvino has passed. My heart is rent asunder- a life of love and joy and wisdom with him is over. He was the most wonderful father. I love him so much. I’m sending you love in the stars Dad as you ascend.

Born on April 13, 1939 in Brooklyn, New York, Sorvino attended The American Musical and Dramatic Academy where he made the choice to go into theatre making his Broadway debut in the 1964 musical Bajour.

He appeared in his first film in Carl Reiner’s Where’s Poppa in 1970 alongside George Segal and Ruth Gordon. Sorvino then took on a supporting role in Jerry Schatzberg’s The Panic in Needle Park in 1971, the film starred Hollywood icon Al Pacino and received critical acclaim.

Critical praise soon followed for his performance as Phil Romano in Jason Miller’s 1972 Broadway play That Championship Season. He secured a prominent supporting role in Academy Award-winning romantic comedy A Touch of Class in 1973 and tried his hand at directing in the 1976 Broadway play Wheelbarrow Closers in 1976.

However, it was in the 1990s that Sorvino played some of his most notable roles including mobster Paul Cicero, who had a passion for cooking, in Martin Scorcese’s Goodfellas in 1990 and Sergeant Phil Cerreta on the popular series Law & Order in 1991.

Following news of Sorvino’s passing, the entertainment world took to social media to share their grief over the loss of the “magnificent” actor.

So sad to hear of the passing of Paul Sorvino—my sincere condolences to his family & loved ones. May he Rest In Peace. pic.twitter.com/eLEWBapZGy

Author, activist and actress Marlee Matlin felt “fortunate” that she had the “chance to work with the great Paul Sorvino”.

I feel so fortunate that I had a chance to work with the great Paul Sorvino. And now I am so sad to read of his passing. Not only was he kind, he was so talented and so giving as an actor. I am sending my love to Mira and the rest of the family. He will definitely be missed. RIP. pic.twitter.com/bgnSMEXPJc

The amazing Paul Sorvino has passed. From Baker’s Wife on Bway to Shakespeare in the Park to all the incredible film/tv roles – he was magnificent in all. Blessings to his friends and family.#rippaulsorvino

The Karate Kid star Ralph Macchio shared that he “had the pleasure of working with and getting to know” Sorvino.

The great Paul Sorvino. So many memorable roles in in so many genres. #RIP to a one of the truest and honest actors I had had the pleasure of working with and getting to know. pic.twitter.com/RKeVeBiv76

Liotta passed away in his sleep at the of age 67 while filming in the Caribbean nation of the Dominican Republic. Caan, the legendary actor best known for his role as Sonny Corleone in The Godfather, died on Wednesday, July 6 at the age of 82 from a heart attack.

Sorvino is survived by his wife Dee Dee and daughter Mira, his son Michael, daughter Amanda as well as his five grandchildren.