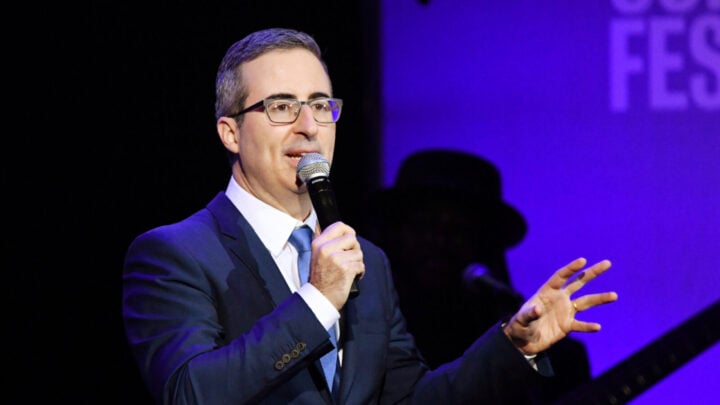 Prince Andrew's untimely diagnosis meant he was unable to attend the special thanksgiving service at St. Paul's Cathedral where he was expected to appear alongside the Queen and close royal family members. Source: Getty

Prince Andrew’s untimely diagnosis meant he was unable to attend the special thanksgiving service at St. Paul’s Cathedral where he was expected to appear alongside the Queen and royal family members.

On Friday, June 3, a Buckingham Palace spokesperson announced that Prince Andrew had tested positive for Covid-19 and would “no longer” be able to be in attendance.

“After undertaking a routine test the duke has tested positive for Covid and with regret will no longer be attending tomorrow’s service,” the spokesperson said.

The Last Week Tonight host wasted no time during the opening of Sunday’s segment with a not-so-subtle dig at Prince Andrew and his Covid-19 diagnosis.

“It has been a busy week—including, least importantly, the Queen’s platinum jubilee, marking her 70 years on the throne. It was basically a four-day celebration of everything that the queen loves – with one key exception,” Oliver began.

“Based on what generally happens with information about Prince Andrew, that Covid test will probably conveniently commit suicide in prison,” he said.

“Or, you know what? You know what? Maybe he’ll pay us all millions of pounds to stop bringing it up,” Oliver continued, taking yet another dig at Prince Andrew’s recent multi-million dollar settlement with Virginia Guiffre, who claimed she was forced to have sex with the royal three times in 2001.

“ Based on what generally happens to information about prince Andrew, his covid test will probably conveniently commit suicide in prison. ”

This isn’t the first time Oliver has made bold statements at the expense of the royal family after he criticised Meghan Markle’s decision to marry Prince Harry in a 2018 interview with Stephen Colbert on The Late Show.

“So I hope she likes it. It’s going to be weird for her.”

After previously stepping down from his royal duties in response to Guiffre’s initial allegations, The Queen relieved Prince Andrew of his honorary military status and leadership of various charities. He can alos no longer use “his royal highness” in official settings.

The Prince was not invited to appear on the Buckingham Palace balcony alongside his mother and the royal family for the annual Trooping of the Colour event which took place on Thursday, June 2.