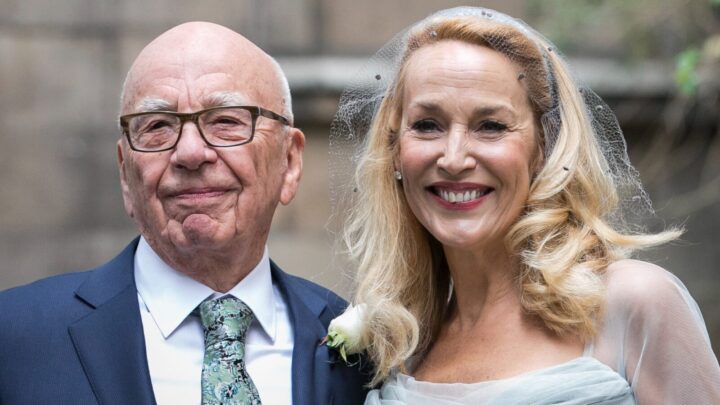 In what the spokesperson described as a "joint statement" from both Murdoch and Hall's attorneys it was revealed that "Jerry Hall and Rupert Murdoch have finalized their divorce." Source: Getty

Hall seemingly had a change of heart when she asked the Los Angeles Superior Court to cancel the divorce petition a mere five weeks after the former model filed to officially separate from Murdoch on July 4.

According to the Daily Mail, the document said the divorce should be dismissed without prejudice and did not state why Hall had wished to cancel her divorce case.

The 66-year-old initially cited “irreconcilable differences” with her 91-year-old husband as her reason for wanting to end their six-year marriage.

However, it would appear the divorce has gone ahead after a statement from a Murdoch spokesperson, provided to The Mirror, claimed that the divorce has officially been finalised.

In what the spokesperson described as a “joint statement” from both Murdoch and Hall’s attorneys it was revealed that “Jerry Hall and Rupert Murdoch have finalized their divorce.”

“They remain good friends and wish each other the best for the future,” the statement read.

Previously, Hall had reportedly employed some aggressive tactics in a bid to get the divorce proceedings moving which included hiring a former Metropolitan Police anti-terrorism officer to serve Murdoch with legal papers moments before he boarded his private jet following his granddaughter’s wedding.

It’s believed Hall’s decision to use such tactics was in response to how “devastated” she was by her marital breakdown after the media tycoon had allegedly ended their marriage via an email Hall had received while waiting for his return to the UK.

In her original petition, Hall claimed she was “unaware of the full nature and extent of all (Murdoch’s) assets and debts” and was seeking to have full access to his financial information.

Murdoch’s split from Hall will make this his fourth divorce.

Murdoch had tied the knot with his first wife Patrica Booker in 1956 before divorcing in 1967 and getting married for a second time to Wendi Murdoch in 1999 before the couple divorced in 2013.

Murdoch then married Anna Murdoch Mann in 1967, however, it wasn’t third time lucky for the mogul as the couple divorced in 1999 before he finally married Jerry Hall in 2016.

The billionaire businessman has a total of six children, sons Lachlan and James Murdoch, and daughters, Elisabeth, Grace, Chloe and Prudence Murdoch.