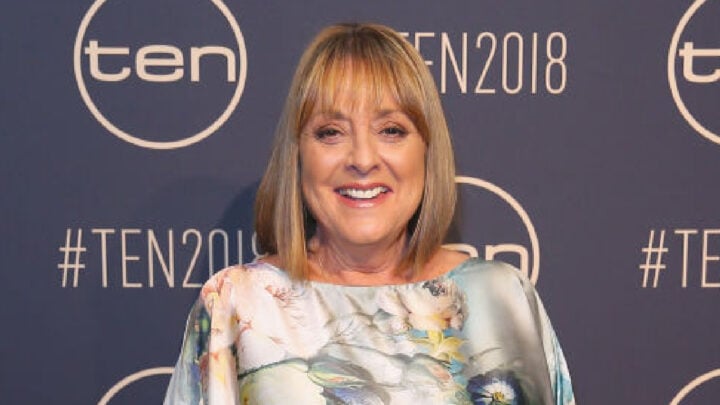 Television host Denise Drysdale has long been known as ‘Ding Dong’ to her colleagues and friends, with the nickname thrown around while she’s speaking on TV, and now the meaning behind the moniker has finally been revealed – and it’s quite cheeky.

The 71-year-old has been in everyone’s thoughts these past few days after she took a tumble while filming her latest show Holey Moley and fractured her shoulder. Since then those close to her have taken the opportunity to share some stories about the presenter – including her former colleague Lawrence Mooney – as she recovers in hospital.

The radio host opened up about his time working with Denise many years ago and spilled the beans on why she’s known as ‘Ding Dong’. Speaking to co-host Jess Eva on his program Triple M’s Moonman in the Morning, Mooney said it first came about while she was working on Ernie Sigley’s show.

“I worked with Denise Drysdale for two years as a hapless sidekick in the kitchen between ’99 and 2000,” he explained. “Great couple of years. Ding Dong came from 1974, when she joined Ernie Sigley’s show as the barrel girl and it is mooted – in fact, it’s widely known – that he named her breasts Ding and Dong. Simpler times.”

The 55-year-old added: “He would call her Ding Dong and everyone knew. It’s like calling your sidekicks ‘big t**ts’.”

To which Jess replied: “Or big ‘hmm’, for men.” And Mooney joked: “Do you want to name my testicles, do you?”

The revelation comes days after Denise was rushed to hospital after injuring herself on the set of the new Channel Seven show Holey Moley. Studio 10 entertainment reporter Craig Bennett shared the news of the incident first while live on air on Friday morning, claiming she “took a tumble”.

“She’s wound up doing herself terrible damage,” he said. “She’s in [the] hospital now, she’s going to be OK.”

It was later revealed by Denise’s management Watercooler Talent that she had fractured her left shoulder and was recovering in the Gold Coast Hospital.

“Denise Drysdale has been transferred from BNE to Gold Coast hospital by ambulance overnight,” a post on Twitter read. “She has fractured her left shoulder. Good news is no surgery! Bad news – she is left handed. She will remain in hospital for pain management and support. She is grateful for the love.”

It’s not clear what Denise’s role will be on the upcoming extreme mini-golf competition series. However, according to a Channel 7 press release popular presenters Sonia Kruger and 7News sports anchor Matt Shirvington will join legendary golfer Greg Norman and American actor and comedian Rob Riggle on the show.

“Holey Moley sees mini golf lovers from around Australia competing head-to-head on the unparalleled, larger-than-life obstacle mini-golf course,” Channel 7 said in a statement. “They’ll face out-of-this-world putting and physical challenges while they attempt to complete the course and reach the daunting final hole.”

Did you know the meaning behind Denise Drysdale's nickname?