Baby joy! Jamie Durie becomes a dad for the second time at 51 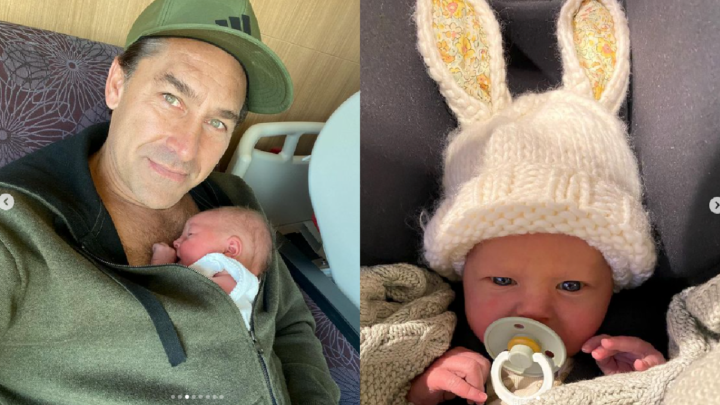 House Rules host Jamie Durie, 51, has welcomed a baby girl with his fiancée Ameka Jane. The gardening guru took to Instagram on Sunday morning to share the exciting news with his 33,000 followers.

The newborn, named Beau Durie, is the second child for Jamie who also has a 26-year-old daughter Taylor from a previous relationship.

“My heart is overflowing,” he wrote, alongside a series of beautiful pictures of himself and his wife cradling their new bub. “We are thrilled to introduce you to our beautiful baby girl … Beau Durie. Words can’t describe how proud I am of my girls … Thank-you my beautiful Ameka for bringing so much joy into our lives.”

One photo showed Jamie sitting on the couch with little Beau tucked inside the front of his hoodie, while another pictured was a close up of the little bub sleeping peacefully.

The 51-year-old gardening guru has become the latest in a long line of older celebs to have kids later in life. In May, supermodel Naomi Campbell, 50, welcomed her first child, and earlier in the year Alec Baldwin, 62, and wife Hilaria, 37, welcomed their sixth child together, a baby girl named Lucia. The little girl was welcomed into the family less than six months after the birth of their son Eduardo ‘Edu’ Pao Lucas on September 8, 2020. It’s believed the pair welcomed Lucia via surrogate, despite previously telling People that they weren’t having any more children.

In 2018, at age 57, actor Eddie Murphy became a father for the 10th time with the birth of his son Max, who was welcomed on December 30 with his Aussie model fiancè Paige Butcher, 39. Murphy is now a recent father and grandfather, fathering the 10 kids —six daughters and four sons – over the past 30 years. Eddie has fathered the children to five different women since 1989, five with his former wife Nicole Mitchell and one each with exes Mel B, Tamara Hood Johnson and Paulette McNeely and two with current partner Paige.

The increasing trend is a big change to previous generations, who stuck to more traditional approaches. In the 1920s, the most common ages to have babies were between 20 and 29, and that remained the same in until the ’80s, when working women started having babies later in life.

Do you have a message for Jamie and his fiancée? How old were you when you had your last child?