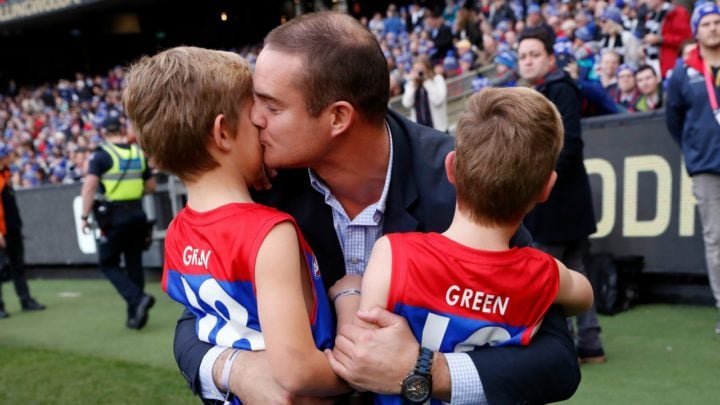 Brad Green gave his kids a big bear hug after they led his former AFL team onto the MCG before Monday's match. Source: Getty

Grieving AFL star Brad Green has left his fans in tears after sharing a moving moment with his two kids as they led his former team onto the oval, just days after they attended the funeral of their mum Anna.

The Melbourne Football Club paid tribute to the family, who tragically farewelled doting mother Anna just weeks ago, by organising for Oliver and Wilber to run out onto the MCG at the beginning of the Queen’s Birthday Monday showdown match.

Dressed in the club’s jerseys, the boys enjoyed a warmup kick with the team in the changing rooms before leading the sportsmen onto the oval for the game against Collingwood.

In footage shared online by the club, proud dad Brad could be seen wiping away tears as he watched his sons happily run out in front of a crowd of thousands of fans.

They even got to throw the ball around with the players before quickly running off the oval to their father who was stood waiting on the sidelines.

The three embraced in a huge bear hug with Brad planting a kiss on each of his son’s foreheads before sitting down to watch the match together.

The emotional footage has garnered a lot of attention from fans who have since left comments of support for the family, with many claiming they couldn’t hold back the tears watching the special moment.

“How can you not shed a tear watching this,” one person wrote.

“Lovely gesture by the club. Can’t imagine what Brad and his family have been going through,” another added. While a third said: “So incredibly sad. Fantastic work by the Dees though.”

Brad also took to social media to thank the club for their support throughout the incredibly difficult time.

In a post on Twitter the former AFL player wrote: “To the @melbournefc and a special mention to @nathan2jones thank you thank you. It certainly put smiles on my boys faces today.”

The dad also shared a photo on Instagram of his sons standing proudly beside player Nathan Jones on the oval.

Anna Green tragically passed away suddenly last month – reportedly after suffering complications from an operation. She was just 40-years-old.

On Thursday, a heartbroken Brad fought back tears as he bid farewell to his “darling” wife in an emotional ceremony just days after her tragic death.

The sporting great was surrounded by hundreds of friends and family in the Members Dining Room at the MCG in Melbourne as he paid tribute to the love of his life and mother to his children, the Herald Sun reported.

Brad led the speeches in farewelling his wife, reportedly telling stories of when they first met and their time together.

Did you watch the AFL match? Do you have a message for Brad and his family?