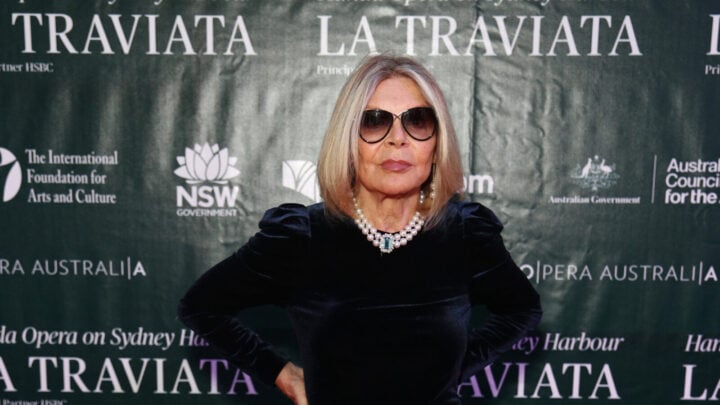 Carla Zampatti just hours prior to her fall at the opening night of 'La Traviata' on Friday, March 26. Source: Getty

Former Sunrise host Sam Armytage has revealed she is “absolutely devastated” after the recent passing of her friend Carla Zampatti, sharing a touching tribute to the late fashion designer on social media.

Zampatti, 78, died on Easter Saturday morning, a week after a tragic fall down some stairs at the opening performance of Opera Australia’s La Traviata in Sydney. The mother-of-three and grandmother to nine spent a week at Sydney’s St Vincent’s Hospital before her passing.

Armytage took to Instagram just hours after news broke of Zampatti’s death, sharing images of the many ensembles by the designer that she has worn over the years, alongside a heartfelt tribute.

Armytage has long been a fan of the iconic designer, wearing her dresses to numerous events, including the Logie Awards and even her wedding. The 44-year old shared an image of the white, long-sleeved Carla Zampatti wedding dress she wore to marry Richard Lavender on New Year’s Eve last year, alongside a caption farewelling her “beautiful friend”.

“Absolutely devastated at the loss of my beautiful friend Carla Zampatti this morning,” she wrote. “She was a creative genius, a wonderful, generous, elegant woman and very much a part of many of my favourite memories. She will be dearly missed but never forgotten. And will live on forever in my heart, and my wardrobe. Vale Carla.”

A host of other famous fans of the designer have also shared tributes, including The Morning Show co-host Kylie Gillies, who commented on Sam’s post saying, “Carla was the epitome of style. A huge loss. Love to her family. And her work family too.”

Packed To The Rafters star Rebecca Gibney also posted a heartfelt message to Instagram, along with flashback images of herself sporting Zampatti pieces.

“So shocked and saddened to hear of the passing of the extraordinary @carlazampatti,” she wrote. “I have worn Carla’s designs in so many fashion shoots, to a multitude of awards nights — including the International Emmys — and most recently on the [TV mini-] series Under the Vines currently shooting in New Zealand.”

After the news first broke on Easter Saturday, ABC chair Ita Buttrose told ABC News that she believed the stairs at the opera were a hazard that needed improvement. “The stairs are very dangerous at the opera,” she said. “Install some rails because otherwise other people might fall as well.”

According to The Daily Telegraph, Opera Australia (OA) has confirmed it will conduct a “comprehensive” safety review after the incident. “In line with OA’s policies and procedures, OA is conducting a comprehensive review of the site and incident. OA is committed to all aspects of the safety of our site and patrons,” a spokesperson said.

“We confirm that no work was done to the stairs in question during the show. Prior to the interval, there was some minor work done in an area not related to the incident involving Ms Zampatti. In relation to the stairs/handrails, the steps are compliant. Some additional measures have also been taken to further enhance access to and from seating across the site.”

The New South Wales Government announced they will be holding a state funeral for the designer, with details to come. Premier Gladys Berejiklian described Zampatti as “talented, generous and inspiring. A true trailblazer in every respect.”

Do you own a Carla Zampatti item? Tell us about it.