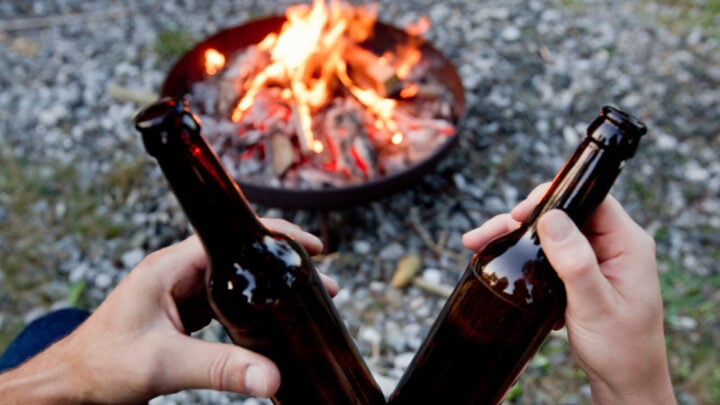 There's nothing quite like a cold beer and a warm fire - but is the wood smoke damaging your health? Source: Getty

There’s nothing quite as Australian as a warm cup of tea or cold beer by the warming flames of an outdoor fire. But some are calling on Bunnings Warehouse to ban the sale of popular fire pits, after a photo of their current range recently sparked controversy on social media.

The image was originally posted on the Twitter account Ban Recreational Wood Burning, with members of the page slamming Bunnings’ display as “unacceptable” and “hideous” and calling for the store to stop promoting the sale of fire pits.

“This is unacceptable @Bunnings. Promoting these polluting firepits,” one tweet read. “Do you promote cigarettes as well? Firepits emit much more toxic pollution than cigarettes. @QldGov it’s time to make sales of wood burners illegal. Clean air is a basic human right. Not Karen using her firepit.”

This is unacceptable @Bunnings. Promoting these polluting firepits. Do you promote cigarettes as well? Firepits emit much more toxic pollution then cigarettes. @QldGov its time to make sales of wood burners illegal. Clean air is a basic human right. Not Karen using her firepit. pic.twitter.com/QvoMClBTRW

“A hideous line-up of products that will pollute your neighbourhood with carcinogenic wood smoke,” wrote another Twitter user. “Come on @Bunnings and @BandQ. Think about people’s health before your profits. Do something positive today – stop promoting these highly polluting things.”

While some users seemed to agree, many took the opposite view, highlighting the “magical” atmosphere they create. “Nothing like a few mates gathered around the fire with a few beers,” one Twitter user wrote. “Even better when you can cook on it. I love the smell of wood smoke. There’s just something magical about watching a fire slowly burn and feeling the warmth that it produces.”

“It’s you throwing a massive tantrum online,” another Twitter user commented. “If you don’t want one, don’t buy one. Hopefully, everyone with a fire pit lights theirs up tonight to show their support for Bunnings.”

The safety of breathing in wood smoke was called into question during last year’s bushfires, with ABC News reporting that prolonged exposure to wood smoke could have a negative effect on the health of many Australians.

The New South Wales Environmental Protection Agency (NSW EPA) website states that woodfire smoke is a major cause of air pollution and contains a number of noxious gases – including ammonia, formaldehyde, benzene and carbon monoxide, all chemicals present in cigarette smoke.

“Smoke from wood heaters is a major cause of air pollution. Not only is a smoking fire wasting your money, but the air pollution it causes can also affect our health,” the website states. “Wood smoke contains a number of noxious gases (including carbon monoxide, oxides of nitrogen, and a range of organic compounds, some of which are toxic or carcinogenic) and fine particles, which go deep into the lungs.

“If you can see or smell smoke from your wood heater then you are causing a problem for yourself, your family and your neighbours.”

Mick Heanue, Bunnings outdoor living category manager, told 7NEWS that all of the store’s fire pits met government regulations. “All our fire pits comply with state and national safety standards,” he said. “Customers should check in with their local council for fire pit use regulations relevant to where they live.”

Each government area has different laws and regulations surrounding the use of fire pits, particularly in residential areas. The rules can be found here:

Do you have a fire pit? Are you concerned about inhaling the smoke?