Simple and stylish: Joan Collins and Sarah Ferguson ramp up the glam in black 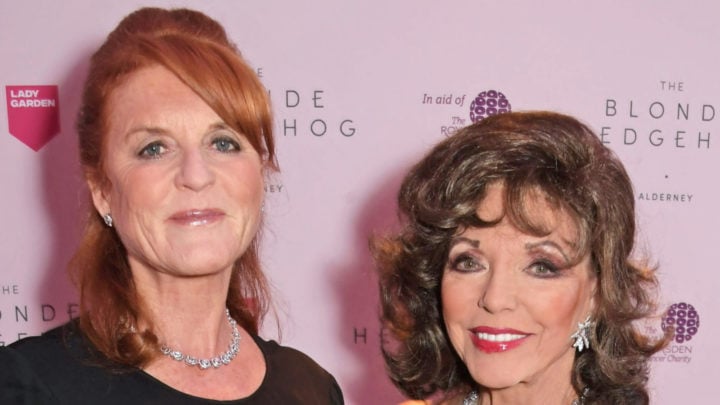 Dame Joan Collins may be in her 80s but that didn’t stop the talented actress from ramping up the glam and enjoying a night out with an impressive line-up of stars in London.

The 86-year-old proved simplicity is they key to good style as she stepped out in a gorgeous off-the-shoulder black frock for the Lady Garden Foundation Gala alongside the Duchess of York. Sporting her usual slightly curled hair-do, the beautiful Dynasty star smiled broadly for cameras in the floor-length dress, with a stunning statement necklace sparkling in the light.

Adding a bit of edge to her ensemble Joan went with a bold pair of heels featuring silver studs, which matched perfectly with her large silver earrings and glittering ring. Meanwhile, the actress added a pop of colour with her favourite bright red lipstick and highlighted her gorgeous green eyes with dark eyeliner.

Joan was joined by Sarah Ferguson for the important charity event in raising awareness and funding for research into gynaecological cancers. The Duchess of York played an important role in the fundraising event, taking prime position as honorary chairwoman.

The 60-year-old glowed as she posed for photos, wearing a long black frock, featuring a ruffled front with black bead detailing. Matching perfectly with Joan, the mother-of-two also teamed her beautiful outfit with silver accessories, including a sparkling necklace, small studded earrings and and two thin bracelets. Keeping with a natural makeup look, Sarah opted for a light pink lip and highlighted her cheek bones with a touch of bronzer.

The event came one day after Sarah celebrated her 60th birthday with her daughter Eugenie the first to wish her mum well on her special day. The 29-year-old uploaded a series of never-before-seen childhood photos of herself and Sarah, including one which showed the young princess, with her hair pulled into cute bunches, reading a book to her mother.

To my beautiful Mumma – Happy 60th birthday. You are an inspiration and one of the people I admire most in this world. Thank you for being you. I love you to the moon and back @sarahferguson15 #birthday

Sharing the sweet images on Instagram, Eugenie wrote: “To my beautiful Mumma – Happy 60th Birthday. You are an inspiration and one of the people I admire most in this world. Thank you for being you. I love you to the moon and back.”

The other images included one of the pair on a skiing holiday, along with a photograph that seems to show Eugenie dressed in a nursery uniform as she clambers out of a car alongside Fergie. Another photo shows the doting mother-of-two fixing her daughter’s hair, with a broad smile on her face, while the final photo shows the duchess cradling her youngest child as a baby.

Fergie’s ex-husband Prince Andrew also shared a public tribute to his former spouse on social media, despite the couple divorcing after 10 years of marriage in 1996. He wrote: “Wishing @sarahferguson15 a very Happy 60th Birthday!”

The Duke of York, who remains on very good terms with his ex-wife, with the couple even living on the same property, also shared a series of photographs alongside his message. One of the images showed the family of four, along with Princess Beatrice and Eugenie’s respective partners, standing outside Buckingham Palace during Trooping the Colour earlier this year.

Prince Andrew also shared two images of Sarah carrying out her charity work as fans commented on the post, sharing their own birthday wishes for the duchess. One wrote: “60? I don’t believe it. It honestly feels like yesterday that I watched Andrew and Sarah get married. It was a lovely day and the two daughters now all grown up as well! Happy Birthday to our dear Fergie!”

Another said: “Happy Birthday Sarah, May you always keep on smiling.” While a third commented: “Happy 60th Birthday Sarah Duchess of York! God Bless You Always!”

What do you think of Joan Collins and Sarah Ferguson's outfits? Which one do you like the best?