What goes around, comes around! The best recycled looks from celebs and royalty 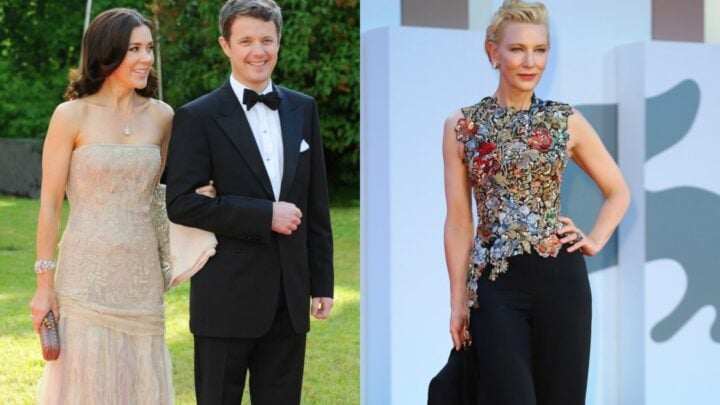 Royals and celebrities like Princess Mary and Cate Blanchett are proving there's nothing wrong with wearing the same garment more than twice. Source: Getty.

Out with the old, in with the… old? While the majority of us have been recycling dresses and re-wearing the same outfits for years, a number of celebrities, and even royals, are now choosing to do the same — not to mention, styles like flared pants, shoulder pads and power suits are making a comeback as well! This includes Australian actress Cate Blanchett who was pictured sporting two very familiar looking outfits at the Venice Film Festival earlier this month.

The actress wore a shimmery navy number, featuring statement sleeves and white trimming, on the opening night of the festival, however, she previously wore the beautiful dress to the London premiere of her film Carol in 2015.

But Cate didn’t stop there as the following night she stepped out in a dazzling floral top teamed with black pants and a blazer. The floral top was originally part of her Alexander McQueen feathered dress she wore to the 2016 BAFTA Awards.

Cate’s thrifty fashion choices got us thinking about the other celebrities who have jumped on the wardrobe-recycling bandwagon recently — and the first that came to mind was Princess Beatrice’ and her show-stopping vintage wedding dress.

Princess Beatrice wore a stunning vintage gown loaned to her by her grandmother Queen Elizabeth II to tie the knot with Edoardo Mapelli Mozzi on July 17, 2020. However, Beatrice remodelled the dress to her liking by adding sheer sleeves and changing the skirt. The Queen wore the gown to the London premiere of Lawrence of Arabia in 1962.

Princess Anne is world-renowned for her frugality when it comes to fashion, and she proved herself a thrifty royal yet again after recycling one of her favourite outfits — an elegant cream and navy ensemble — at the 2018 Commonwealth Day service at Westminster Abbey in London. The royal first wore the timeless outfit in the 1980s at the Royal Ascot.

Princess Mary knows a thing or two about recycling garments, and in September last year, the Aussie-born royal was spotted sporting a remodelled dress. The garment in question is a blush tulle dress, which she shortened to attend a dinner at the Swedish ambassador’s residence in Copenhagen, Denmark last year. The mother-of-four was first seen in the stunning Ralph Lauren gown back in 2010 for the pre-wedding dinner of Sweden’s Princess Victoria and Prince Daniel.

Lisa Wilkinson is no stranger to an outfit repeat. The Project host admitted to wearing the same Carla Zampatti dress on three separate red-carpet occasions on Instagram in 2017. “Current favourite dress,” she captioned the post, which garnered plenty of attention from fans who praised the television host for her recycling efforts. “This is it’s third red carpet outing, which I’m not sure is even legal, right? But hey, I’m kinda loving living dangerously right now.”

Do you recycle or remodel your favourite clothes?