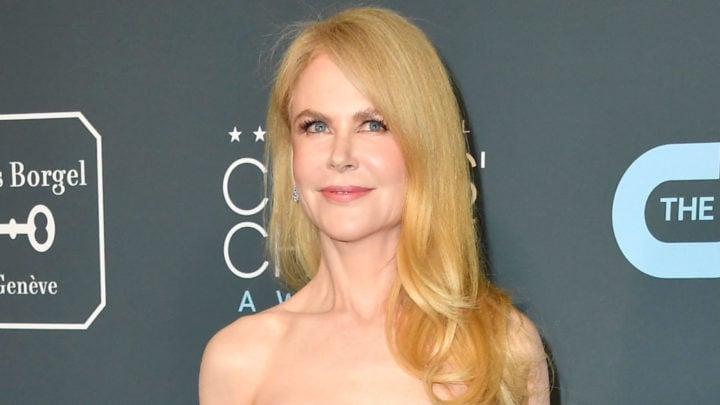 The 52-year-old Aussie icon looked sensational as she arrived at the awards bash on Sunday. Source: Getty.

Awards season is now officially underway in Hollywood, following the Golden Globes last week, and Australian superstar Nicole Kidman led the way on Sunday evening as she stepped out in a stunning ball gown for the 25th annual Critics’ Choice Awards.

The 52-year-old Moulin Rouge star looked incredible for the prestigious awards bash as she posed for photographs on the blue carpet. However Nicole was not joined by her husband Keith Urban, also 52, on this occasion as the country singer was playing a show in Las Vegas.

Nicole was glowing as she arrived at the event wearing an incredible gothic gown which featured a black velvet strapless bodice, which hugged the actress’ petite frame perfectly. The frock may have been simple up top, but the full skirt made a dramatic statement thanks to the intricate beading and pink ombre underskirt which helped to soften the all-black outfit.

The dress also featured a thick black leather-look band around the centre, and Nicole opted to let the gown take centre stage as she opted not to wear any jewellery for the outing, instead allowing her blonde hair to flow over her shoulder in soft curls.

The Sydney native was nominated for two awards at Sunday night’s ceremony (Monday AEST) as she and her co-stars bagged a nomination in the ‘Best acting ensemble’ category for the movie Bombshell, which focuses on the real-life culture at Fox News, leading to accusations of sexual harassment against the late CEO Roger Ailes.

While Nicole was personally nominated in the category of ‘Best actress in a drama series’ for her role as Celeste in HBO series Big Little Lies. She is up against the likes of Olivia Colman, for her role as Queen Elizabeth II in The Crown, and Jodie Comer, who plays assassin Villanelle in BBC series Killing Eve.

Ahead of the glitzy ceremony, Nicole shared a selfie on Instagram alongside the caption: “Heading to @CriticsChoice for Big Little Lies and Bombshell.” Many fans commented on the image, which showed the mother-of-four smiling at the camera, with one person saying: “Timeless beauty!”

Another wrote: “The most beautiful woman ever inside & out!” While a third commented: “So elegant and beautiful always Nicole!”

Nicole’s appearance at the Critics’ Choice Awards comes one week after she stepped out with husband Keith, with whom she shares daughters Sunday and Faith, at the 77th annual Golden Globe Awards at The Beverly Hilton hotel in Los Angeles.

The Lion star looked incredible in a vibrant cherry red frock which featured a straight, strapless bodice and fell straight to the floor, with a dramatic thigh-high split up the front of the skirt and a dramatic train which Nicole swept to one side. While she completed the classic look with a pop of red lipstick and a beaded gold handbag.

Nicole was nominated in the ‘Best performance by an actress in a television series – Drama’ category, for her role as Celeste Wright in HBO’s Big Little Lies, however she lost out on the night to British actress Olivia Colman, whose performance as Her Majesty the Queen in the third series of Netflix drama The Crown bagged her the gong.

What do you think of Nicole Kidman's look? Have you seen her latest movie 'Bombshell'?