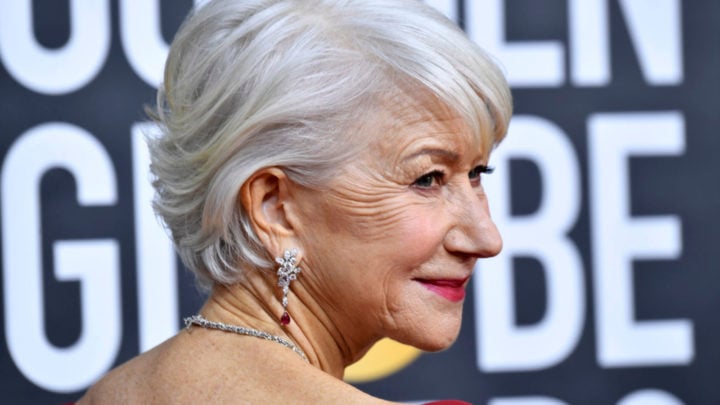 Helen Mirren is never one to shy away from making a statement on the red carpet. Source: Getty.

With Christmas and New Year over and done with, it’s now that time of year where Hollywood’s biggest and brightest stars slip on their swankiest suits and frocks to celebrate the industry’s achievements over the past 12 months.

Awards season officially kicked off on Sunday as the 77th Golden Globe Awards was held at The Beverly Hilton hotel in Los Angeles, and huge stars such as Dame Helen Mirren, The Crown’s Olivia Colman and Australian icon Nicole Kidman were out in force and showed off their incredible looks on the red carpet.

And while all three are stars in their own right, each nominated for an award in their respective categories, they each opted for striking gowns in varying shades of red for the annual event.

Always one to make a style statement, Helen, 74, opted for a statement ball gown, which seems to have become her signature style of late, and she played around with the scarlet gown’s full skirt as she posed for photographs on the red carpet.

The structured frock featured an off-the-shoulder neckline which showed off Helen’s décolletage as well as elegant full sleeves and a flowing skirt. The dress also cinched in at the waist with a small belt detail, perfectly showing off the actress’ incredible figure.

The Good Liar star is nominated for ‘Best performance by an actress in a limited series or a motion picture made for television’ thanks to her starring role as the Russian empress in HBO series Catherine the Great. She is up against Kaitlyn Dever and Merritt Wever, who both starred in Unbelievable, as well as Michelle Williams and Joey King.

Also up for a gong at the event – which takes place on Monday morning AEST – is homegrown star Nicole Kidman who put on a loving display on the red carpet with husband Keith Urban, as the pair beamed at each other, while country singing star Keith stepped back to allow his wife to shine in front of the cameras.

The Moulin Rouge star looked incredible in a vibrant cherry red frock which featured a straight, strapless bodice and fell straight to the floor, with a dramatic thigh-high split up the front of the skirt and a dramatic train which Nicole swept to one side.

The actress, who revealed at the weekend that the home she shares with Keith in NSW’s Sutton Forest region is under threat from the bushfires, completed her classic look with a pop of red lipstick and a beaded gold handbag.

Nicole is nominated in the ‘Best performance by an actress in a television series – Drama’ category, for her role as Celeste Wright in HBO’s Big Little Lies. The 52-year-old is up against Olivia Colman who took over the role of Her Majesty the Queen in the third series of Netflix drama The Crown.

Olivia, who won an Oscar last year for her role as Queen Anne in The Favourite, was joined at the Hollywood bash by her co-stars including Tobias Menzies, who plays the Duke of Edinburgh, and Josh O’Connor who plays the Queen’s eldest son Prince Charles.

The British actress made a show-stopping appearance on Sunday as she stepped out in a sophisticated red gown which featured ’80s-inspired puffed sleeves, a quirky funnel neckline and a simple train which fell separately from the skirt of the A-line dress.