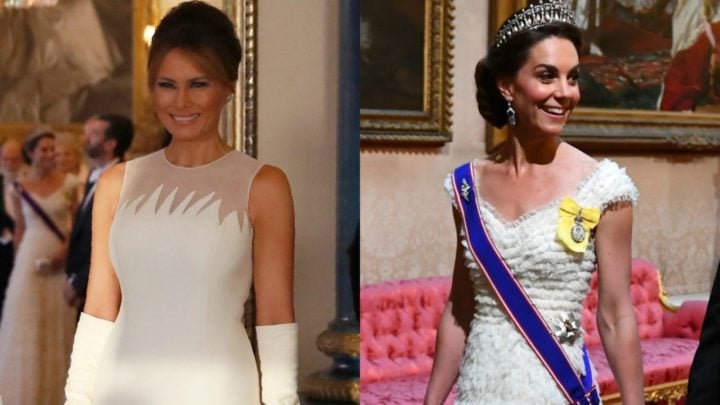 Melania and Catherine, the Duchess of Cambridge, were visions in white at the state banquet. Source: Getty

Melania Trump pulled out all the stops for a glamorous evening at Buckingham Palace on Monday night as she stepped out in a stunning floor-length gown with her husband US President Donald Trump.

The First Lady looked glowing in the floor-length white gown, by French luxury label Dior, which she paired with elbow-length white gloves. Melania complemented the outfit with a pair of diamond stud earrings, while she wore her brunette locks up in a chic up-do.

The 49-year-old and her president husband were welcomed to the lavish residence for a special state banquet as part of their visit to the UK.

The 92-year-old monarch looked equally stylish in a floor-length white gown, which she paired with a silver bag and matching heels. She finished off the look  with a burmese ruby and diamond tiara.

Meanwhile, Camilla was the picture of elegance in stunning embroidered evening gown by British designer Bruce Oldfield, a diamond tiara and wore a pearl and rose topaz choker.

However, all eyes were on the Duchess of Cambridge, who stepped out in a white Alexander McQueen gown, paired with the Lover’s Knot tiara, which was one of Princess Diana’s favourites. She also wore a blue, red and white sash of the Royal Victorian Order, to which she was appointed in April, over her dress.

Earlier in the day, the Queen greeted the US President and Melania at Buckingham Palace, where she held a private lunch for them. The couple then met Prince Charles and Camilla, Duchess of Cornwall for tea.

— The Prince of Wales and The Duchess of Cornwall (@ClarenceHouse) June 3, 2019

For the occasion, Melania wore a custom Dolce and Gabbana white suit, which featured a contrasting navy blue collar and coordinating waist belt. She added a wide-brimmed hat by Hervé Pierre which also had a pop of colour. Melania finished the look with a pair of matching heels by Manolo Blahnik.

Are you a fan of Melania and Donald Trump and the British royal family?