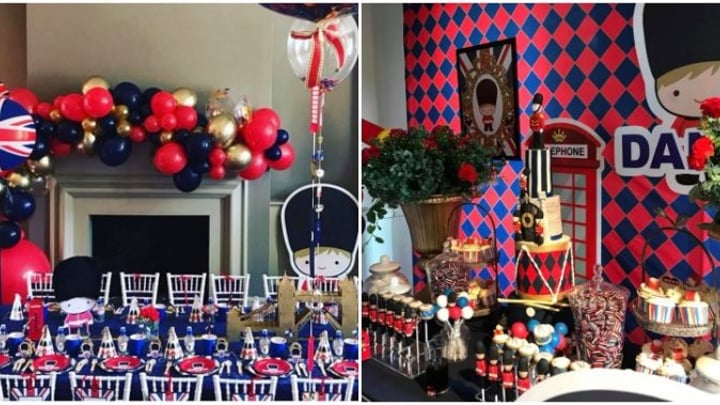 Every grandparent is guilty of spoiling their grandkids at some point, but one grandmother in the UK took things to a whole new level when she splashed out £16,000 (AU$28,339, US$21,430) for her grandson’s first birthday party.

Sharon Moseley, from Essex, funded the lavish celebration for her grandson Danny’s special day and splashed thousands of pounds on party planners, themed balloons and decorations, and even bought the tot a bespoke gold high chair which cost £650.

Danny had three outfit changes during the party, at a cost of £500, and the 170 guests were treated to a four-tiered cake and an impressive seafood buffet, as well as live entertainment which included a Punch and Judy show, face painting and a magician, and an open bar for the adults, costing thousands.

The 53-year-old grandmother told The Daily Mail that she didn’t care if people judged her for spending so much on the bash, which was held at a luxury wedding venue, and said: “People who know me know that I would do it best. If you are going to do it, you have to do it properly. You only live once so why don’t you enjoy it!

“Why shouldn’t I celebrate the birthday of my grandson, what an amazing thing that has happened. I would do it again. I’m proud to be British and I wanted the party to reflect that, which is why it has a soldiers theme.”

Read more: Is there such a thing as spoiling your grandchildren too much?

The soldier-themed event was filled with themed decorations and a guest list of 60 young children tucked into chicken nuggets, cheeseburgers and chips, which were served on silver platters, while adults dined on fresh seafood, bringing the food bill to a whopping £2,500.

Wait staff then handed out desserts to the children, which included strawberries and marshmallows to be dipped into a chocolate fountain, as well as cake pops and brownies. And, at the end of the day, the kids took home party bags which included water bottles branded with Danny’s name.

Danny’s mum Georgia, 26, joked: “My birthday parties were never this big! I don’t even think my wedding would be this much. But I didn’t have a baby shower or anything so this is the first time that we’re celebrating. And we’re making lots of memories for the future.”

Read more: The fine line between treating grandkids and spoiling them rotten.

There seems to be a rising pressure to spend more and more cash on children’s birthday parties, with the ABC reporting in 2016 that the average cost of a child’s party had increased to around $500-$1,000.

There have also been a number of stories in the press recently about parents requesting that other mums and dads purchase lavish gifts for their child’s birthday. One story involved an Aussie mum who was outed online after she uninvited children from her 12-year-old daughter’s party after their parents said they couldn’t afford any of the gifts listed on the expensive registry.

What do you think? What is the most you have ever spent on a party or special occasion?