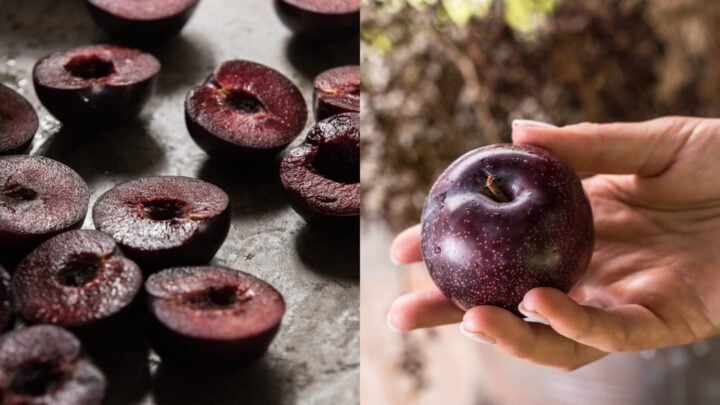 Queen Garnet plums are full of antioxidants and could help boost your health in more ways than one. Source: Queen Garnet

Looking after our health has never been more important amid the outbreak of the coronavirus, and you’ve likely been taking all the supplements and eating masses of fruits and veggies to help fight off any nasty bugs. But, there’s a special product on the market that you might not have heard of – and it’s been hailed as a “superfood”.

The Queen Garnet plum is a fruit which was developed in Queensland and is now grown all around Australia. But it’s not any ordinary plum. Unlike other varieties of the fruit it has notably high levels of Anthocyanin – an antioxidant found in many naturally dark-coloured fruits such as blackcurrants, blueberries and raspberries. In fact, it contains antioxidant levels three to 20-times that of other plums and an abundance of healthy vitamins such as vitamin A, vitamin C and vitamin K, while also supplying dietary fibre and offering very low calories without any harmful fats.

You can buy the plums at the supermarket when they’re in season from late January to April, but there’s an Aussie health startup which has included the goodness of the fruit in juices, powders and supplements that you can consume all year-round. And it has been scientifically backed by the Queensland Government and multiple Australian universities.

Nutrafruit has a range of different products available, including a nectar, a probiotic and prebiotic powder, powder sachets and probiotic chewables. The nectar is made from 100 per cent Queen Garnet plums, with no added sugar, colours or flavours and no concentrate. It’s similar to a whole fruit smoothie with much of the fibre kept intact. You can have it on its own or mix it in with yoghurt, smoothies or sparkling water.

But, what’s so good about these products? Well, they’re backed by researchers who say Queen Garnet plums can help boost your health in a variety of ways. In fact, daily consumption of the plums could attenuate the development of cardiovascular and metabolic diseases and assist with the symptoms of irritable bowel disease.

According to a study led by Professor Michael Mathai from the Victoria University, the plum’s nectar even reduced blood pressure, fasting glucose, insulin and LDL cholesterol levels in overweight patients who consumed it over the course of three months. Incredibly, the nectar from the fruit gave a similar result in reductions of blood pressure as when people took antihypertensive drugs.

Speaking about the superfood, Nutrafruit Chief Executive Officer Luke Couch said consuming the fruit in one way or another is an effective and easy way to nourish the body.

“More than just a fruit, we’ve made the Queen Garnet plum the star of our great wellbeing range,” he said. “Whether enjoyed fresh or from the packet, the plum’s versatility and royal antioxidant status make for easy integration into the Aussie diet and effortless nourishment for both body and soul.”

Do you suffer from high blood pressure? Have your heard of Queen Garnet plums?