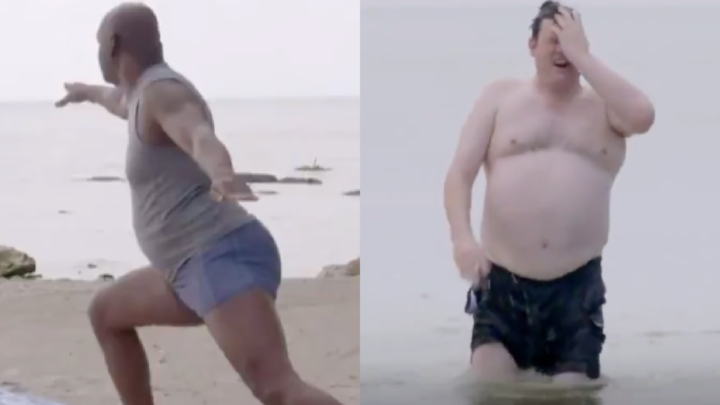 Shaun Wallace and Mark Labbett like you've never seen them before. Source: ITV/Twitter.

If you’re a The Chase fan, you know Anne Hegerty, Mark Labbett and Shaun Wallace with their tightly laced, slightly scary personas at full force. But you’re likely to get a surprise if you happen to catch the video of their new show The Chasers Road Trip: Trains, Brains And Automobiles, which hit television screens in the UK overnight.

The three-part series features the Chasers on a road trip across the US, where they’re seeking to answer the question: “Are we really as smart as we think we are?”. The entertaining bit is that you see  the team as ‘real people’, not their usual Chaser personas. The TV program is currently only airing in the UK, but ITV has released a sneak peak in a video to tantalise international fans.

In a clip from the show, Mark, known as ‘The Beast’ on the popular game show, does his best James Bond impression as he emerges from the sea in a pair of snug-fitting board shorts, just like James Bond star Daniel Craig did in Casino Royale. The Chaser appears to be in good spirits, despite officially splitting from his wife Katie in August last year after discovering she was cheating on him with a younger man.

Get a sneak peek into how your Chasers like to relax in between outsmarting animals, kids and robots… ????????

Another scene shows Shaun, who’s nicknamed ‘The Dark Destroyer’ on the game show, practicing yoga on the beach. And fans couldn’t help but notice Shaun’s rather restrictive workout shorts, with Twitter user @katherine050100 commenting, “It’s fair to say that Shaun Wallace is leaving nothing to the imagination.”

And @efawkner jokingly added: “Just came on to see if Shaun Wallace’s ‘bulge’ was trending”. Eat your heart out, Greg Norman!

Anne, best known as ‘The Governess’ on the successful series, also reportedly got her kit off on last night’s episode, slipping into a bosom-y black bikini to swim with dolphins.

Fans of The Chase used social media to congratulate the trio on the new show, with Twitter user @LoulabelleH writing: “@anne_hegerty, @MarkLabbett and @TheShaunWallace — thank you! Loved tonight’s episode, great insight to you all outside The Chase. Animals are truly wonderful things and yes, we should look after them [and] respect them more. Great series.”.

And @DinkyKt commented: “Really enjoying watching #thechasersroadtrip. Good to see the chasers as themselves”. Meanwhile, @bymysidebritsau asked whether we could have an Aussie version.

Anne was also praised online by fans for opening up about her autism diagnosis, after last night’s episode reportedly saw her rush off a nightclub dance floor after finding the situation overwhelming.

“One of the things that quite often goes along with autism is certain sensory issues,” Anne said after the nightclub scenario, The Mirror reported. “It’s about not really liking noise to come out at me – especially if I am feeling a bit tired or stressed. Sometimes I need to just take myself away, have a bit of quiet, jump on the wi-fi, do a bit of online quizzing and I’m fine.”

Are you a fan of the chasers? Would you like their new show to come to Australia?