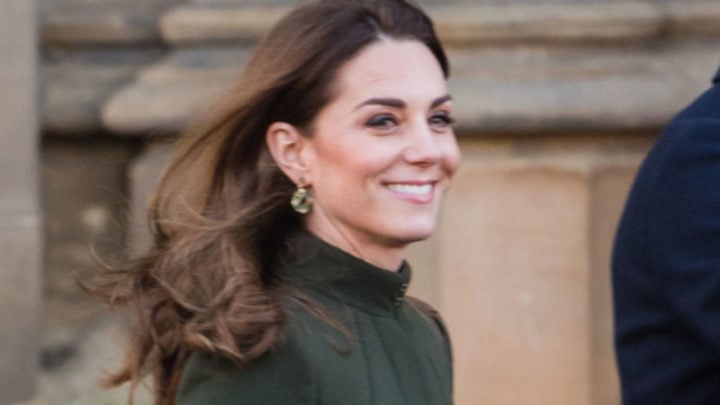 The Duchess of Cambridge stepped out with Prince William in Bradford on Wednesday. Source: Getty.

Catherine and Prince William stepped out in Bradford yesterday and, while the couple are usually quite reserved when it comes to making public displays of affection, the duke and duchess looked more loved-up than ever as they greeted crowds in the northern English city.

Prince William even showed off his romantic side during the outing, presenting his wife with a single white rose after the duchess was handed a bouquet of flowers by a well-wisher, following a visit to Bradford City Hall.

Catherine smiled sweetly at her husband of eight-years as she accepted the single stem in front of the crowds who had gathered to catch a glimpse of the pair. Footage of the sweet exchange was later shared on social media by Kensington Palace, with royal followers gushing about the happy couple.

One person wrote: “What is so nice about William & Catherine is that they genuinely look happy & engaged in what they are doing as well as looking as if they actually do like each other! Nice to see.”

Another said: “I love this couple, they epitomise what it is to be Royalty & seem to have such genuine love and respect for each other.

The couple, both 38, were in Bradford to visit a range of projects which promote community cohesion, as the city is one of the UK’s most diverse. Their first stop was to visit a community garden in the West Yorkshire town which aims to help grandparents and grandchildren build strong bonds.

William and Catherine also met apprentices from Bradford College and proved they aren’t afraid to get their hands dirty as they made mango and kulfi milkshakes. They then visited the Khidmat Centre where the duke and duchess took part in a Little Dots workshop which “uses music and play to support children’s social, emotional and physical development, while simultaneously supporting adult self esteem”, according to Kensington Palace.

The Duke and Duchess of Cambridge later joined a workshop with Near Neighbours, an organisation which brings together people from religiously and ethnically diverse communities across the UK to get to know each other better.

Catherine looked elegant, as always, for the outing as she wrapped up against the cold British winter weather in a stunning deep green coat by British fashion house Alexander McQueen. She paired the chic coat, which fell to her ankles, with a pair of block-heeled court shoes and an eye-catching pair of emerald and diamond drop earrings.

Kate later ditched her coat to reveal a striking houndstooth dress beneath. The chiffon frock, from high street retailer Zara, featured long puffed sleeves and a midi-length skirt, while it fastened in a statement pussy bow around her neck.

Yesterday’s outing was the couple’s first joint engagement since the news of Prince Harry and Meghan’s desired abdication broke. Last week, the Duke and Duchess of Sussex shocked the world when they released a statement on their Instagram account, which revealed they would be stepping back from their roles as senior full-time royals.

Following the news, the Queen sat down with Harry, along with Prince Charles and Prince William, at Sandringham to discuss the couple’s future, with the monarch releasing a statement on Monday which said she and her family respected their wish for a different life.

“Today my family had very constructive discussions on the future of my grandson and his family,” Her Majesty said. “My family and I are entirely supportive of Harry and Meghan’s desire to create a new life as a young family. Although we would have preferred them to remain full-time working Members of the Royal Family, we respect and understand their wish to live a more independent life as a family while remaining a valued part of my family.”

“Harry and Meghan have made clear that they do not want to be reliant on public funds in their new lives,” the Queen’s statement added. “It has therefore been agreed that there will be a period of transition in which the Sussexes will spend time in Canada and the UK.”

Are you a fan of the Cambridge family? Do you think William will make a good king one day?