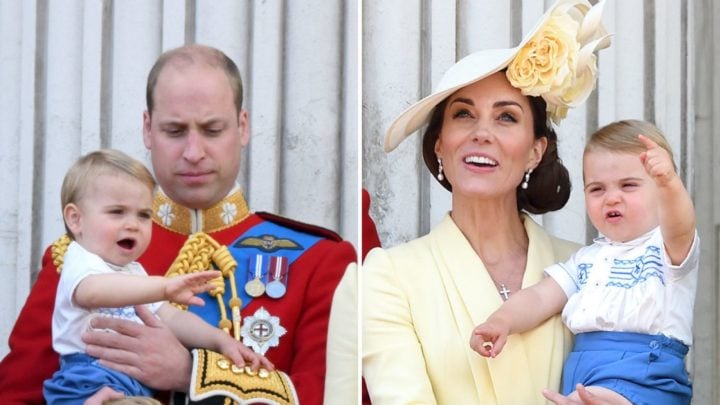 Prince Louis stole the show with a series of hilarious facial expressions and waves. Source: Getty

He’s one of the youngest members of the royal family but Prince Louis is already a hit with royalists around the world.

The one-year-old made his balcony debut at Saturday’s Trooping the Colour ceremony in honour of Queen Elizabeth’s birthday. Everyone from Prince Harry to Princess Eugenie and Princess Anne joined the Queen on the balcony of Buckingham Palace to wave at crowds and watch the spectacular RAF flypast.

It was little Louis’ first time at the event and while the royals impressed with a number of show-stopping outfits, it was Louis’ reactions to the festivities that truly stole the show.

The 13-month-old was overwhelmed by everything going on and delighted onlookers with a series of hilarious facial expressions.

He was carried by both Prince William and Duchess Catherine and pointed up in the sky in amazement as the Royal Airforce and Red Arrows let off a spectacularly vibrant vapour trail of red, white and blue.

At other times he looked a bit baffled by the events but whenever impressed, began clapping. Perhaps the biggest highlight was when the event finished and the royal family was waving to the crowds.

After a fantastic #TroopingTheColour parade the @RoyalFamily say goodbye to the crowds outside Buckingham Palace. #QBP2019 pic.twitter.com/lHZdseLoxQ

Louis also paid a special tribute to uncle Prince Harry for his first. The tot wore an adorable blue and white outfit which was first worn decades before by Prince Harry at one of his first Trooping the Colour events in 1986.

Vintage photos show a young Prince Harry cuddling up to Princess Anne on the balcony as a glowing Princess Diana watched on from close by.

Prince Louis was joined by his older siblings Prince George and Princess Charlotte – who both stood proudly at the front of the balcony and also watched on in amazement.

It was a much better year for four-year-old Charlotte, who took a tumble at last year’s event. Duchess Catherine’s motherly instincts quickly kicked in and as she tried to comfort her visibly distraught daughter. Viewers at home last year noticed the little royal leaning over the balcony for a closer look when she appeared to lose her balance and slip.

Almost instantly, the Duchess of Cambridge scooped up her daughter and comforted her until she stopped crying.

Trooping the Colour originated from traditional preparations for battle and has commemorated the birthday of the sovereign for more than 250 years. The event is performed by regiments of the British and Commonwealth armies for the Queen’s birthday parade, allowing them to pay a personal tribute to the monarch.

More than 400 parading soldiers, 200 horses and 400 musicians came together on Horse Guards Parade in London for this year’s festivities and a 41-gun salute fired by The King’s Troop for the parades conclusion.

Happy Birthday to Her Majesty The Queen!

The Duke and Duchess of Cambridge, Prince George, Princess Charlotte and Prince Louis joined Her Majesty and members of the @RoyalFamily to watch the @RoyalAirForce fly past #TroopingTheColour pic.twitter.com/WY4Y35ZfQN

— The Duke and Duchess of Cambridge (@KensingtonRoyal) June 8, 2019

Are you a fan of Prince Louis? Do you have any grandchildren around his age?