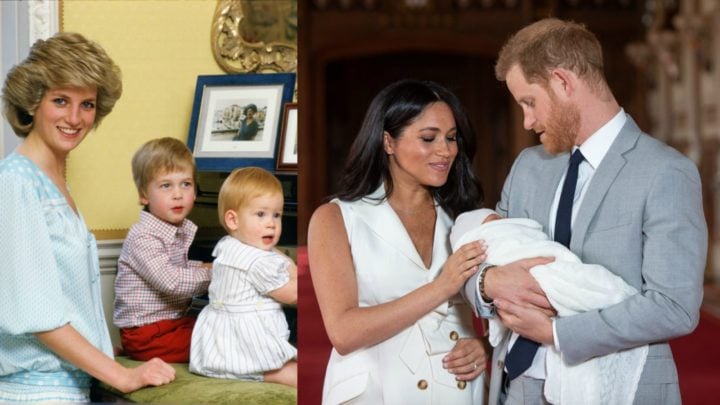 Prince Harry flew to the Netherlands just one day after introducing baby Archie to the world. Source: Getty.

Just hours after the Duke and Duchess of Sussex proudly debuted their new son Archie Harrison Mountbatten-Windsor to the world, Prince Harry jetted off to the Netherlands to launch the countdown to the Invictus Games.

And, while there, the new dad opened up about the death of his mother Princess Diana more than two decades ago, telling a former soldier that losing a mother is like “missing some kind of security” in a candid chat on Thursday.

According to British newspaper The Sun, Harry spoke openly to veteran Dennis van der Stroon, who is also about to become a father for the first time, about how baby Archie has given him a “new focus” since making his way into the world just four days ago.

“I told Harry about my mother and we talked about our shared experience of missing a mom,” van der Stroon told the newspaper. “He said missing a mother is like missing some kind of security, how you need that as a son and it falls away when you lose your mother.

“He said he meets a lot of people in his work who have lost a mother, father, sister, brother or relatives and when he hears their story, as he heard my story, he said he doesn’t feel so alone.”

He added: “Harry talked about how having a small child was his new focus and new goal and I told him how a couple of months ago, I was struggling with my mental health but my wife’s pregnancy has given me a goal.”

The Duke of Sussex today attended the official launch of The Invictus Games The Hague 2020. The Invictus Games is an international sporting event for wounded, injured and sick Servicemen and women. Sport has the power to help people physically and psychologically. Our mental fitness is the key, because without it we fail to operate efficiently; but with it your physical performance and potential are exponentially improved and we have witnessed this over and over again. Thousands of hopeful competitors around the world are training hard, putting the hours in and aiming to represent their country once again at next years’ Games. 19 nations will be represented in The Hague, standing shoulder to shoulder, and showing the world what teamwork, friendship and loyalty really means. In these challenging times these values are more important than ever. It is your resilience, your determination and your courage which draw crowds in their thousands. Leaving them feeling more inspired, moved and proud than they ever thought possible. You have already proved – anything is possible. Make these games your own. We chose you for a reason. And it wasn’t just because I like the colour orange! Thank you all for guarding the Invictus Spirit and see you in 2020. – The Duke of Sussex

The duke, who founded the Invictus Games in 2014, had been due to fly to Holland on Wednesday, however his trip was postponed by one day as wife Meghan, the Duchess of Sussex, did not deliver their son until the early hours of Monday.

Before before leaving the UK though, Harry and his wife of almost one year gave the world a first glimpse of their gorgeous baby boy, who slept peacefully throughout the photo op on Wednesday, swaddled in a white blanket.

The couple beamed with pride as they showed off their first child, as Prince Harry joked: “He’s already got a little bit of facial hair as well, wonderful!”

New mum Meghan also added: “He has the sweetest temperament, he’s really calm,” to which Harry joked: “I don’t know who he gets that from!”

Meghan, whose mum Doria Ragland was also with her daughter throughout the final stages of her pregnancy, also described her happiness at having the “two best guys in the world”.

What are your thoughts on this story? Have you experienced the loss of someone very close to you?