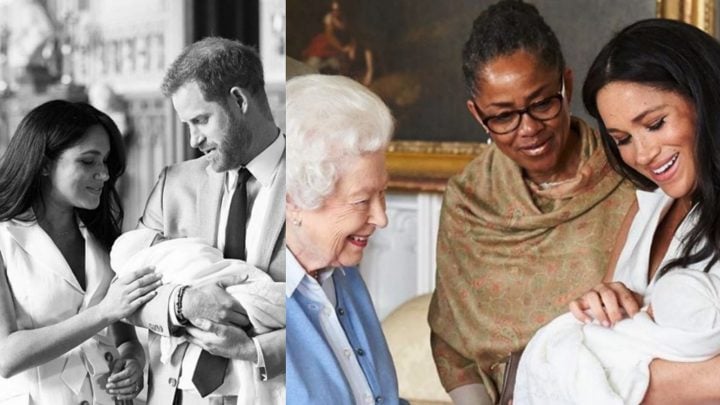 New parents Prince Harry and Meghan may have kept the world waiting for a first glimpse of their baby son Archie Harrison Mountbatten-Windsor, but they have more than made up for it now by sharing a whole series of beautiful family photos online.

From an adorable snap showing the Queen and Prince Philip meeting their great-grandson alongside Meghan’s proud mum Doria Ragland, to stunning pictures of the Duke and Duchess of Sussex themselves staring lovingly at their baby boy, there are a series of very natural and adorable moments captured in the photos.

In one, shared online in both colour and black and white by different royal Instagram accounts, Meghan is seen staring lovingly down at her son while the Queen stands in front of him laughing.

New grandmother Doria is stood behind her daughter, also looking down at Archie, while the Duke of Edinburgh and Prince Harry join behind them all – both sharing a proud smile.

The Duke and Duchess of Sussex also shared a stream of snaps, taken by photographer Chris Allerton, of them alone with their baby son.

The couple first shared a glimpse of Archie in a short press conference with reporters at Windsor Castle. While Harry was seen carrying his baby boy in his arms, Meghan linked arms with her husband and was seen repeatedly looking down and smiling.

Harry dressed smartly in a grey suit and navy blue tie for the occasion, while his beautiful wife opted for a belted white double breasted midi dress, reportedly by Wales Bonner.

A photo, shared by the couple on Instagram, shows them both looking down as they cradle their son, edited into black and white to match the family snap.

Meanwhile, it was followed by another photo of them walking away with Meghan holding a loving arm round her husband’s back – a mirror image of a photo taken following their official engagement photoshoot.

Prince Harry and Meghan Markle after announcing their engagement in 2017, and after debuting their new son Archie to the world in 2019. 💙 #9Today #BabySussex pic.twitter.com/837BpUBGZh

Flashing beaming smiles, the couple even shared some light-hearted jokes with reporters as Harry joked: “He’s already got a little bit of facial hair as well, wonderful!”

Meghan also added: “He has the sweetest temperament, he’s really calm,” to which Harry joked: “I don’t know who he gets that from!”

Elsewhere, photographers managed to capture a close-up image of sleeping Archie’s little face, although his hair was completely hidden with a tiny white woolly hat at the time.

Fans were quick to congratulate Prince Harry and Meghan on social media after seeing the adorable pictures.

One comment on Instagram read: “The luckiest little baby to have the combination of your two beautiful souls. Love the name.”

Another fan said: “Such a beautiful picture so happy for them.”

A third added: “Wait and see, every little boy in Britain will be named Archie.”

The couple initially made the announcement that they had welcomed a son on their official Instagram page, sharing an image with the words, “It’s a boy” across it.

The palace then made the official announcement on Monday (UK time) with a notice of birth going on display on the forecourt of Buckingham Palace, revealing Meghan had delivered a healthy baby at 05.26am at the couple’s home of Frogmore Cottage in Windsor, London.

Speaking on camera at the time, a beaming Harry told news reporters: “I’m very excited to announce that Meghan and myself had a baby boy earlier this morning, a very healthy boy. Mother and baby are doing incredibly well. It’s been the most amazing experience I could ever have possibly imagined.

“How any woman does what they do is beyond comprehension, but we’re both absolutely thrilled and so grateful to all the love and support from everybody out there. It’s been amazing, so we just wanted to share this with everybody.”

What do you think of the couple’s choice of name? Do you have any family members called Archie?