Forget Victoria or Philip: The unusual name tipped for Harry and Meghan’s baby 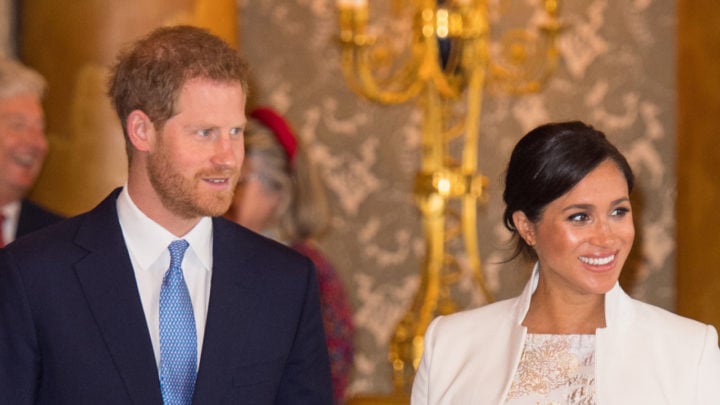 Prince Harry and Meghan could apparently consider the name Allegra for their first child. Source: Getty

As royal fans wait in anticipation for the arrival of Prince Harry and Meghan’s first child, a new and slightly unusual name has worked its way up the list of potential options for the couple.

While the favourite traditional names such as Elizabeth, Arthur and of course Diana continue to lead the way there are now speculations that the Duke and Duchess of Sussex, who have opted to forego other royal traditions throughout the pregnancy, could opt for something very different.

Although the royal family has not revealed the gender of the baby, with Harry and Meghan said to be keeping it a surprise, according to British betting company Ladbrokes the soon-to-be parents may choose the Italian name Allegra if it’s a girl.

The name is said to hold a special meaning for Harry as it was reportedly the name his mother Princess Diana was considering before she found out she was expecting boys.

Allegra, which means cheerful or lively, has made its way into the top 10 list, beating classics such as Albert and Victoria. As of Monday Allegra had odds of 12/1, placing it in sixth position, closely behind much more traditional options.

Speaking about the surprising shuffle in betting Alex Apati of Ladbrokes said it has come as a bit of a shock for the company who have been watching the numbers go up.

“We’re scratching our heads as to why we’ve seen so much interest in Allegra, but the bets are coming in thick and fast and it’s been by far the most popular pick of the month with punters,” he explained.

In a chat with Vanity Fair a Ladbrokes spokesperson added: “It’s probably the most bizarre eleventh hour move we could’ve seen. We wouldn’t be surprised to see the name right up there with the frontrunners by the time the birth gets announced.”

Although the name has quickly jumped through the ranks, Grace and Diana maintain the lead at 6/1 apiece; ahead of 8/1 shots Arthur and Elizabeth.

Read more: When is the royal baby due? All the predictions for Harry and Meghan’s first child

While Meghan and Harry have confirmed they will be staying out out of the media spotlight when their baby arrives, preferring to keep certain details of their first child private until after they have settled in together, rumours are rife about the newest member of royalty.

Betfair spokesperson Katie Baylis told Starts at 60 recently: “Following a flurry of bets on the baby to be a girl – it’s now odds-on at 1/2 that we will have a little Princess in the coming weeks.”

However, according to Us Weekly, a source at Meghan’s recent baby shower has claimed the duchess told friends she is having a baby boy – although that has not been confirmed by the royal family. Further rumours went into overdrive when Meghan’s close friend Abigail Spencer was spotted carrying a gift wrapped in blue paper.

Buckingham Palace confirmed last month that the young royals will not follow in the footsteps of Prince William and Kate and pose for photos outside of the prestigious Lindo Wing, with Meghan said to favour the idea of having a home birth. So we may have to wait a while to find out what name they settle on for their bundle of joy.