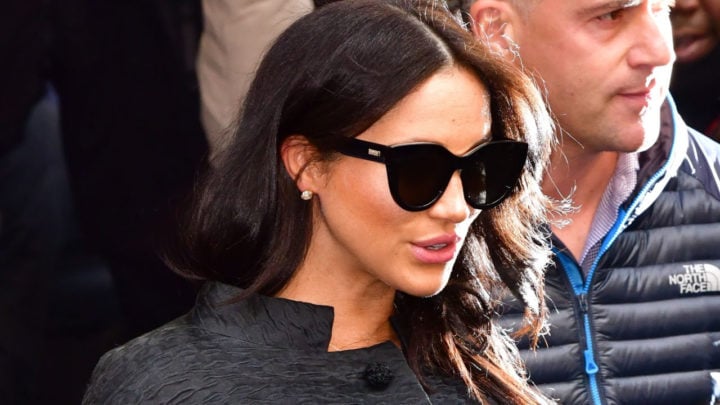 Meghan's pals are said to have planned an elaborate baby shower for the former actress in New York. Source: Getty.

There are just weeks to go before the world welcomes another royal baby, as the Duke and Duchess of Sussex get ready for the birth of their first child together at the end of April.

And it seems that Meghan has already begun celebrating as the glamorous duchess has been pictured out in New York City, having flown back to her homeland to mark the special occasion with her closest friends.

Fifteen of Meghan’s pals, including several of her former Suits co-stars, are said to have planned an elaborate baby shower for the 37-year-old expectant mother, according to the Daily Mail, and now photographs have emerged showing Prince Harry’s wife in the ‘Big Apple’.

The heavily pregnant duchess was snapped, flanked by bodyguards, clutching her blossoming bump as she left The Park hotel in Manhattan at around 1pm on Tuesday afternoon, before making her way to the Met Breuer art museum ahead of her rumoured shower.

Dressed head to toe in black, Meghan wrapped up against the winter weather in a short-sleeved collarless coat, which she paired with a casual pair of black skinny jeans and nude stiletto heels, with a taupe handbag draped over her arm.

The royal, who is in the United States without her husband of nine-months Prince Harry, was seemingly attempting to go incognito as she donned an oversized pair of dark designer sunglasses for the unofficial outing.

Read more: Meghan is radiant in cream dress and heels at glam event with Prince Harry.

As Meghan celebrates her imminent arrival with her pals, her husband the Duke of Sussex stepped out for an official royal engagement back home in the UK.

The duke visited Fit and Fed in London on Tuesday, which is a campaign run by charity Street Games that aims to provide children and young people with free access to activity sessions and a nutritious lunch during school holidays.

The Duke helps serve lunch with Principle Youth Worker, Mark, who has been attending @StreathamSYCT since he was a child. pic.twitter.com/w0F5btN6ye

— The Duke and Duchess of Cambridge (@KensingtonRoyal) February 19, 2019

Getting stuck in as usual, Prince Harry helped to dish up healthy lunches for the children, as well as watching a Jui-Jitsu demonstration and spending time with the children who attend the sessions.

The royal couple were last seen together last week when they attended a gala performance of The Wider Earth, marking the 210th birthday of Charles Darwin at London’s Natural History Museum – the same venue the pair were rumoured to have enjoyed a secret date together in 2017.

Wearing a knee-length, roll neck Calvin Klein dress and a matching coat, reportedly by Amanda Wakeley, the Duchess of Sussex looked stunning as she showed off her growing baby bump.

Adding olive green stiletto heels and a matching clutch bag, she appeared effortlessly elegant once again for the outing and wore her hair tied back in a stylish up do.

Meanwhile, her husband pulled out all the stops too in a smart navy suit and tie, standing beside Meghan’s side as they were greeted outside the venue.

According to the Mirror, the pair were rumoured to have enjoyed a private tour at the museum in March 2017, with a source reportedly adding at the time: “Meg had always wanted to go so Harry arranged a private visit. It’s quite romantic after dark as all the exhibits, including the dinosaurs, are all still lit up. And of course, they had it to themselves.”

Did you have a baby shower? Do you think it’s nice that Meghan has taken time out from her busy royal schedule to celebrate with her friends?