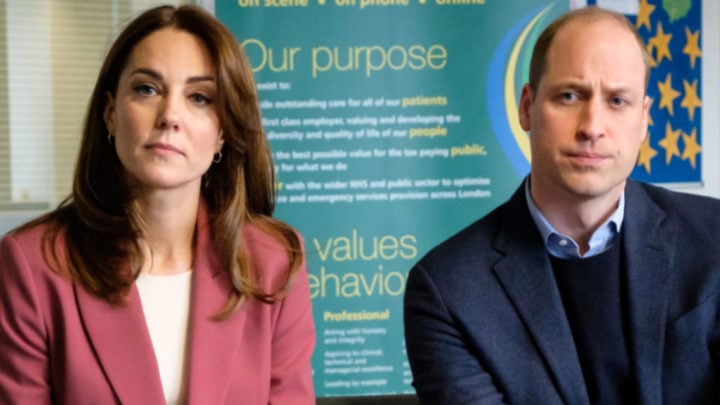 The Duke and Duchess of Cambridge met with staff who have been taking NHS 111 calls from the public. Source: Getty.

The Duke and Duchess of Cambridge made an important public appearance on Thursday as they visited the London Ambulance Service 111 control room to meet staff who have been taking NHS 111 calls from the public.

Catherine and Prince William’s visit to the key emergency service centre was kept secret from the public until now, most likely to prevent crowds gathering in the wake of strict social distancing guidelines.

The duke and duchess looked uncharacteristically serious for the outing, more often seen smiling and laughing with the public, as they met with key members of staff and those dedicated employees handling the huge influx of calls from concerned people, as the number of confirmed cases of the virus continues to rise in the UK.

Catherine dressed smartly for the occasion – as she and Prince William acted on behalf of Her Majesty the Queen – and opted for a salmon pink two-piece suit, with a simple white sweater underneath. While Prince William wore his signature navy blue suit, with an open-collared shirt and matching navy jumper.

During the visit, Their Royal Highnesses spoke to staff members and the Chief Executive of the London Ambulance Service, Garrett Emmerson, about how they are dealing with the increase in demand on the NHS 111 service.

They also heard about when members of the public can help alleviate pressure on the system by using advice available online at nhs.uk/coronavirus before contacting 111.

Speaking during the outing, William said: “Catherine and I were proud to visit staff working at NHS 111, to pass on our personal thanks, along with those of my grandmother and father, to staff working around the clock to provide care and advice to those that need it most.”

It comes after it was rumoured that the duke, 38, would step in for his grandmother Her Majesty the Queen amid the ongoing pandemic, as the monarch and the Duke of Edinburgh move to Windsor Castle to protect their health.

“As Philip and I arrive at Windsor today, we know that many individuals and families across the United Kingdom, and around the world, are entering a period of great concern and uncertainty,” the Queen said in a heartfelt statement on Thursday.

“We are all being advised to change our normal routines and regular patterns of life for the greater good of the communities we live in and, in particular, to protect the most vulnerable within them. At times such as these, I am reminded that our nation’s history has been forged by people and communities coming together to work as one, concentrating our combined efforts with a focus on the common goal.”

Whenever and wherever adversity strikes, the people of the UK have a unique ability to pull together. The way that local communities support those affected shows the very best of our values and human nature. The public’s desire to help in the wake of tragedy needs to be managed and channelled in the best possible way – which is why the establishment of the National Emergencies Trust was so important. The NET has launched an appeal to raise funds to help local charities support individuals suffering hardship as a result of the #coronavirus outbreak. Visit @national_emergencies_trust_ or the link in our bio to find out more.

Aa day earlier, the future king also shared a personal video message about the pandemic and described the recent outbreak as the “day he dreaded”.

The video was shared on the official Kensington Palace Instagram account on Wednesday, and discussed the important work of the National Emergencies Trust (NET), which the father-of-three launched just last year.

“Whenever and wherever adversity strikes, the people of the UK have a unique ability to pull together,” he said. “The way that local communities support those affected shows the very best of our values and human nature.

“The public’s desire to help in the wake of tragedy needs to be managed and channelled in the best possible way – which is why the establishment of the National Emergencies Trust was so important.”

Have you been personally affected by coronavirus? How are you looking after yourself in these testing times?