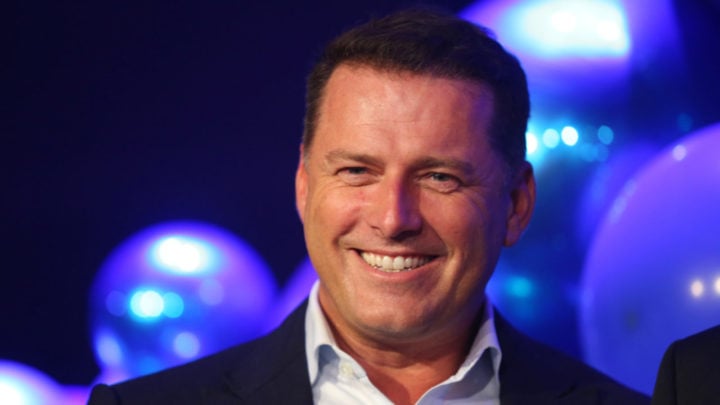 Karl Stefanovic has spoken of his disappointment that his much-loved mother, Jenny, won’t get to meet his new baby daughter when she’s due later this year, as the coronavirus crisis unfolds.

The Today host and his wife Jasmine are based in Sydney, while his mum lives in Cairns, and strict new government restrictions mean people are not allowed to travel between states and territories.

The presenter became emotional when discussing the interstate travel restrictions and hospital protocols and said Jenny feels “so isolated” in Queensland.

“My mum lives in Cairns,” he explained on the Today show. “She’s just turned 70. She feels so isolated … she can’t travel interstate.”

Karl’s co-host Allison Langdon then added: “She’s got lots of new grandbabies, well almost”. To which Karl replied: “The reality is, she’s not going to be able to meet them because hospitals aren’t going to allow anyone else into the birthing rooms and that.”

“So that’s hard. That’s hard for a grandparent,” he said.

Karl and his family aren’t alone in this situation. Other grandparents have taken to online forums such as Gransnet to vent about their struggles.

“My GD (granddaughter) aged three years gave her cuddle blanket to my son with instructions to ‘tell nana to stroke her face with this and she will feel much better’,” one grandmother wrote. “[I’ve] Not seen her for two weeks, usually mind her three days a week. Missing her.”

“I met up with DD [dear daughter] and grandkids this afternoon in a country park and we kept our distance and had a walk and chat in the fresh air,” another said. “No hugs or physical contact. I held it together till we got back in our cars and they drove off.”

Karl and Jasmine have kept fairly tight-lipped about their pregnancy over the past months. Back in January, Karl revealed his joy at becoming a dad for the fourth time and said that his wife is “glowing”.

Speaking on the Kyle & Jackie O Show, the Today show host confirmed the news that he and Jasmine are expecting their first child together, having previously only addressed the rumours with a tongue-in-cheek social media post.

The interview marked the first time that the couple had spoken publicly about the news, despite the fact that reports about their pregnancy had been making headlines since as early as November last year.

Are you self-isolating? How are you keeping in touch with your grandkids?