‘Jasmine is glowing’: Karl Stefanovic opens up on pregnancy for first time 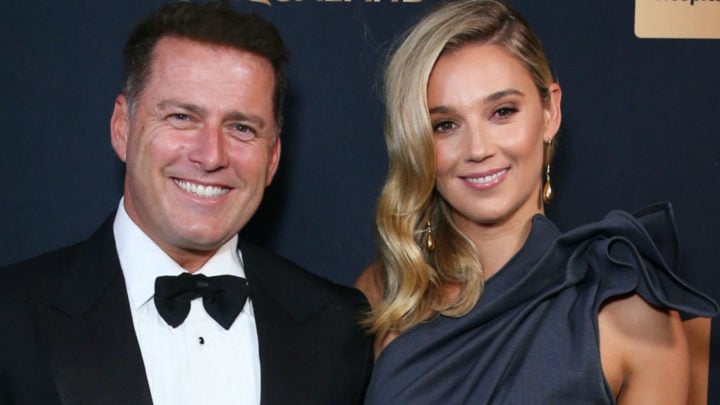 Jasmine and Karl have remained tight-lipped about their pregnancy so far. Source: Getty.

They have kept tight-lipped about their pregnancy so far, but Karl Stefanovic revealed his happiness at becoming a father for the fourth time on Monday and said that his wife of one-year is “glowing”.

Speaking on the Kyle & Jackie O Show earlier today, the Today show host confirmed the news that he and Jasmine are expecting their first child together, having previously only addressed the rumours with a tongue-in-cheek social media post.

“[Jasmine] is glowing, she’s happy and we’re all very happy,” he said, according to the Daily Mail.

The father-of-three – who shares children Jackson, 20, Ava, 14, and River, 12 with his ex-wife Cassandra Thorburn – then revealed that they have chosen not to find out the gender of their impending arrival ahead of the birth.

He added: “We have very few surprises in this life, and there’s been so much of us that is public. [During] the whole thing, we’ve been trying to hold on to ours.”

The interview marked the first time that either Karl 45, or Jasmine have publicly spoken out about the news, despite the fact that reports about their pregnancy have been making headlines since as early as November last year.

Last month photographs of the shoe designer, taken from one of her friends’ Instagram accounts, were published by several media outlets which allegedly showed Jasmine attending her own baby shower in New York City.

Then, shortly after Christmas, paparazzi photographs showing Jasmine with a seemingly visible baby bump as she relaxed on the beach in a black swimsuit were published, triggering a hilarious reaction from the Channel Nine star.

After a great deal of speculation…the rumours are true. 👶🏼

Putting to bed the rumours about his wife, and confirming that they were in fact true, Karl shared an image of himself on the beach on Instagram, alongside a rather tongue-in-cheek caption in which he appeared to be poking fun at his own figure.

However the choice of emoji Karl used didn’t go unnoticed by fans as he chose to finish the seemingly joking message with a baby symbol. He captioned the image: “After a great deal of speculation…the rumours are true.”

Fans were quick to comment on the Instagram post and many people wished the couple, who tied the knot in Mexico last December, the best for their impending arrival.

Have you been following this story? Are you a fan of Karl?