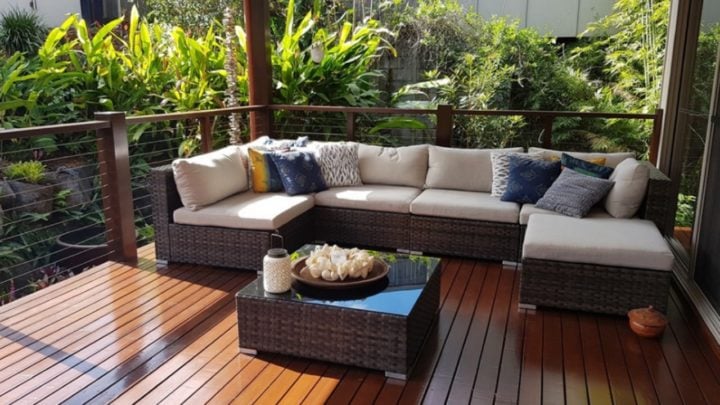 A sneaky snake has fooled Aussies across the country as it hid in plain sight on a Queensland resident’s back deck, seemingly making the most of the warm weather over the weekend.

Sunshine Coast Snake Catchers took to social media on Sunday with one of its “spot the snake” games after startled homeowners discovered the python lounging about outside lapping up the sunny rays.

In the post shared on Facebook, snake catcher Stu uploaded a snap of the decking area, showing a comfy looking couch and coffee table and asked fans to guess where the snake was hiding.

“We haven’t played this game for a while so see how you all go,” he wrote alongside the image. “Extra points if you can tell me the species as well! I will post the answer later tonight or tomorrow morning.”

He added: “This is pretty tough so I will give you a clue. What do snakes like to make the most of in the mornings?”

The post received hundreds of comments as curious fans tried their best to spot the slippery snake in the beautiful backyard.

“Is it on the cushion?” One person questioned. “Looks to be coiled amongst them.”

Another guessed: “Over on the rock above the pond. A carpet python.”

While a third was left absolutely dumbfounded writing: “I can’t for the life of me see anything like a snake! God it’s hard!”

After giving followers a while to search the snap Stu finally revealed where the snake lay hidden. It may take a bit of squinting or the the best pair of reading glasses to see, but the reptile is actually lying behind the couch with a small part of its body seen behind the cushions.

“Hey guys, so you can definitely see him in the original picture,” the snake catcher wrote on the post. “You can just see part of his body. I have circles it in this screen shot picture. You have to zoom in a fair bit though. Apologies for making it so difficult.”

Stu also uploaded a video to the Facebook page, to further reveal the snake’s hiding place and what occurred that morning when the home owner discovered it shortly after waking up.

The footage begins from a similar position as the photo showing the couch on the deck before moving closer to reveal the snake enjoying a nap in the sunshine on the furniture.

“We’ve just arrived at a home in Buderim,” Stu explained in the video. “The lady, the home owner here she was about to come out and enjoy the morning sun and sit down on her sun lounge here but you see there is a sneaky little snake enjoying the sun lounge as well.

“Quite a decent sized carpet python found the perfect spot here just above all the cushions and it’s the spot the sun hits for probably the first three hours of the morning.”

Stu also showed footage of himself releasing the snake back into the wildlife a short distance from the home with hopes it wouldn’t return to the house.

The python could be seen slithering over Stu’s shoulder after sliding its way out of the bag it was contained in back at the home as it made its way onto a tree.

Did you spot the snake? Have you ever found a snake at your home?