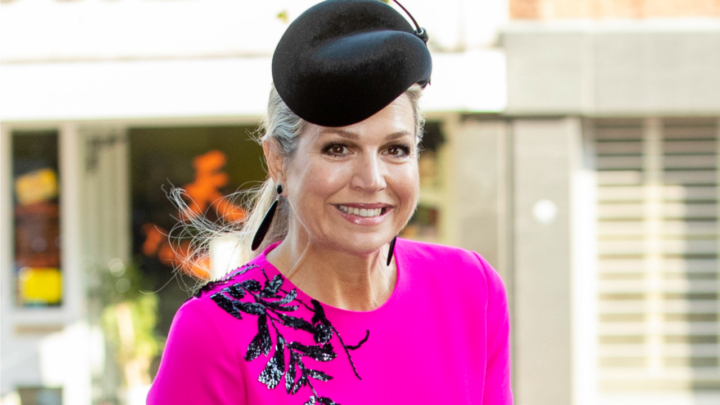 Queen Maxima was all smiles as stepped out in a colourful dress for an engagement in Utrecht on Thursday. Source: Getty

Unlike her more traditional royal counterparts, Queen Maxima of the Netherlands is never one to shy away from a fashion-forward frock and she proved so once again in a colourful dress for an engagement in Utrecht on Thursday.

She teamed the bold dress with a pair of black heels and a co-ordinating fascinator and clutch, looking every bit the leading lady that she is. Wearing her blonde locks up in a pony, the mother-of-three finished off the stylish look with a pair of statement earrings.

The fashion-forward royal appeared in high spirits despite recently undergoing surgery last month. In March, it was announced that Queen Maxima had undergone a “minor and planned” operation and would spend some time away, resting.

Meanwhile, it comes after the Argentinian-born royal stepped out in a stunning blue dress, which featured yellow, red and pink detailing, along with a feathered hem, for the Prins Bernhard Cultuurfonds awards in Amsterdam, in November last year.

She teamed the bold dress with a pair of red heels and a co-ordinating clutch. Wearing her blonde locks up in a chignon, the mother-of-three finished off the stylish look with a pair of statement turquoise earrings.

She was attending the ceremony to present this year’s Prins Bernhard Cultuurfonds award to Dutch conductor and composer Reinbert de Leeuw. The fund was established by Prince Bernhard in London in 1940 during World War II, and now supports culture, nature and science in the Netherlands.

What are your thoughts on this? Are you a fan of Queen Maxima? Do you like her style?