Match made in heaven! Princess Beatrice coordinates her look with new boyfriend 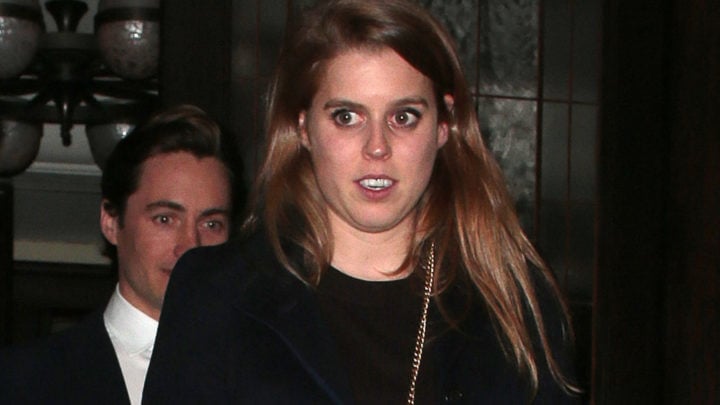 The princess couldn't hide her smile as she left the restaurant with her boyfriend of seven months. Source: Getty.

They have been dating for around seven months and it seems things must be going well between Princess Beatrice and her beau Edoardo Mapelli Mozzi as the couple coordinated outfits for their latest date in their home city of London.

The 30-year-old royal, who is the eldest daughter of Prince Andrew and Sarah Ferguson, stepped out with Mozzi earlier this week as the pair enjoyed dinner at an upmarket steak restaurant.

Princess Beatrice could barely keep the smile off her face as the pair left the restaurant together, having seemingly coordinated their outfits to match each other, both wearing a subtle hint of crimson.

The princess, whose younger sister Princess Eugenie tied the knot in October last year, looked gorgeous in a deep burgundy pleated skirt, which fell just below her knee. She completed the evening outfit with a simple black jumper, a pair of black high-heels and a warm black wool coat.

While her businessman boyfriend – who goes by the name ‘Edo’ – looked dapper in a dark, slim cut suit with a coordinating crimson tie, to match his royal girlfriend, and a pair of black leather lace-up shoes.

Read more: The princess couldn’t hide her smile as she left the restaurant with her boyfriend of seven months. Source: Getty.

The pair were also joined at the Mayfair restaurant by Beatrice’s mother the Duchess of York, who wrapped up against the cold in a gold pashmina, which added a touch of glamour to her outfit.

Fergie looked stylish as she left the eatery in a black knee-length dress, with a pair of opaque black tights, while Prince Andrew’s ex-wife kept things casual in a pair of black trainers, which featured a white sole, and a black leather jacket. Beaming at the cameras, the red-haired duchess looked stunning, wearing subtle make-up and her hair in a half-up style.

Beatrice and Edo are said to have been introduced through mutual friends, according to Town & Country magazine, who reported that their relationship is growing “pretty serious”. According to the publication, Beatrice’s parents were friends with Mozzi’s late stepfather Christopher Shale, who worked in British politics prior to his death in 2011 at Glastonbury festival.

What are your thoughts on Princess Beatrice’s outfit? Do you think it’s nice to see her looking loved up?