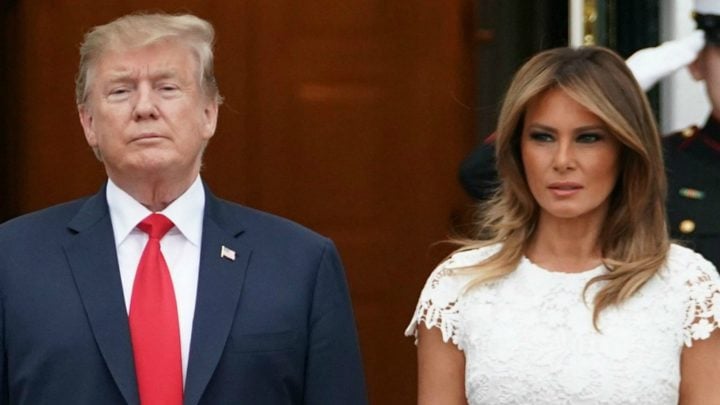 She never fails to impress on any official engagement but Melania Trump pulled out all the stops as she celebrated her 49th birthday on Friday.

The US First Lady ensured all eyes were on her as she joined her husband Donald for dinner with Japanese Prime Minister Shinzo Abe and his wife Akie Abe at the White House.

Showing off her stunning figure, Melania opted for a tight white lace dress that finished just below the knee with a sheer panel of floral detailing.

She coupled the killer outfit with some sky-high scarlet red stilettos and wore her hair loose and wavy in her signature style.

She co-ordinated perfectly with her husband Donald, who opted for a bright red tie with his suit. They stood for official photos outside the main doors alongside the Japanese politicians, before heading inside for the relaxed evening.

It came after the White House shared a birthday message for the First Lady on Twitter, showing her sat alone on a huge sofa in a stylish green coat, surrounded by cameras and reporters.

Unfortunately, the post was soon inundated with hilarious responses as people questioned why she was alone and began editing other objects in beside her.

Social media users edited everyone from Vladimir Putin to Kellyanne Conway into the snap, with more questioning why that particular photo was chosen at all.

“WHY WOULD YOU PICK THIS PHOTO,” one wrote while another even added a snap of her sat on the iconic Friends sofa in Central Park.

Meanwhile it’s been a busy few days for Melania who once again stole the show at the annual Easter Egg Roll.

The First Lady showed off her maternal side on that occasion as she played with a group of children, read them a book and even joined them for a series of selfies in the grounds outside, looking as stylish as ever in a blue summer dress.

Opting for a loose knee-length number, Melania coupled the frock with some flat beige pumps – a rare change from her usual stylish stilettos – and wore her hair loose and wavy over her shoulders.

Another wonderful Easter Egg roll! @POTUS and I enjoyed meeting everyone! Thank you to the many volunteers and vendors who worked so hard to help keep this @WhiteHouse tradition alive!! #EasterEggRoll2019 pic.twitter.com/O5ULBuNapp

She was joined by her husband, 72, who took some time out to greet the kids himself alongside his wife before standing to watch the celebrations.