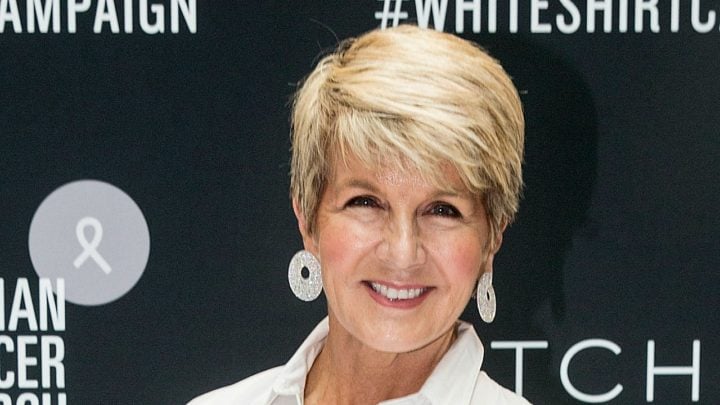 Julie Bishop stepped out in black leather pants and a white shirt as she raised awareness for ovarian cancer. Source: Getty

Julie Bishop may have stepped down from her high profile position in politics but she certainly hasn’t left the spotlight for good, as she was snapped in a very stylish outfit this week.

The former foreign affairs minister has built up quite the reputation as a fashion icon during her time in parliament, regularly attending events in stunning heels and dresses, and now the 62-year-old has shown off her gorgeous style once again at a charity event.

Julie exuded confidence as she posed for snaps in a pair of black leather pants and a crisp white shirt to raise awareness for World Ovarian Cancer Day on Wednesday.

Standing tall in black stilettos, the former deputy leader of the Liberal Party made a bold statement at the event at the Witchery head office, with red nail polish and dangly earrings.

Meanwhile, Julie kept her makeup to a minimum for the special occasion with a pink lip and swipe of blush on her cheeks.

The campaign itself runs from April 10 to May 8, with White Shirt Day recognised on the last day. Women across the country are given the opportunity to raise much needed funds for ovarian cancer research by purchasing and wearing a white shirt.

This year marks the 11th year of the campaign with a total of $12 million raised for research since the beginning.

Proud to announce that I am an official ambassador for @witcheryfashion #WhiteShirtCampaign in support of @ocrf. For every white shirt sold, 100% of gross proceeds is donated to OCRF, undertaking vital research to find an early detection test 👗👠 pic.twitter.com/SkbGISNgZ3

Earlier this year Julie announced her support for the campaign as one of its official ambassadors. In a post shared on social media the former politician explained the importance of raising funds and her commitment to creating change.

“Proud to announce that I am an official ambassador for @witcheryfashion #WhiteShirtCampaign in support of @ocf,” she wrote on Twitter alongside a photo of herself in a white shirt.

“For every white shirt sold, 100 per cent of gross proceeds is donated to OCRF, undertaking vital research to find an early detection test.”

Julie received a lot of praise for her decision to support Aussie women with many leaving comments of support.

“You are a classy lady,” one person wrote. “All the best in your future endeavours. I’m a huge admirer of you and your work.”

“Thank you for putting Australian research at the forefront of medical discovery,” another commented. While a third said: “I admire you, such a great cause.”

Are you a fan of Julie Bishop? What do you think of her decision to support ovarian cancer research?