Out with a bang! Julie Bishop dons killer heels as she farewells parliament 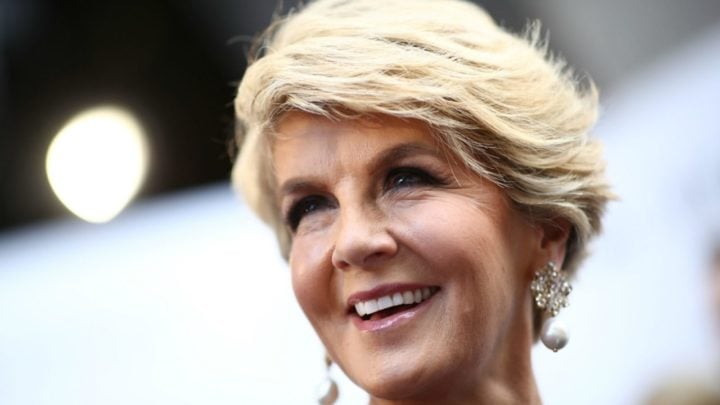 Julie Bishop has farewelled parliament for the final time after announcing her resignation from politics earlier this year.

The former deputy leader of the Liberal party shared two photos on her Instagram page showing her with her feet propped up on a packing box in her office, wearing a killer outfit and her signature glamorous heels.

The 62-year-old pollie looked amazing for her final goodbye, opting for a zip-up black dress with matching black heels, which took centre stage in the photo with statement silver jewelled heels.

She added large silver dangly earrings to complete her elegant look and appeared in great spirits despite it being an emotional time, as she flashed a wide smile to the cameras.

After 20 years in politics it is time to leave🙋‍♀Thank you to everyone who provided support, advice and encouragement💙Now on to the next chapter!👠

Writing alongside the photo, she commented: “After 20 years in politics it is time to leave. Thank you to everyone who provided support, advice and encouragement. Now on to the next chapter!”

Fans shared a stream of supportive messages on the post, with one writing: “You were an amazing foreign minister so many amazing proud moments thinking this lady should be our Prime Minister!! I have no doubt whatever you go on to do you will do with elegance and grace that you have done up until now! Good luck. Ps where did you get that dress?”

Meanwhile another wrote: “And really so sad about this. I had hoped you would be our PM. A huge loss for this country and the women you represented.”

And one commented: “The best PM we never had.”

Speaking to The Australian on her final day, Bishop revealed she plans to take a break from politics now to focus more on the private sector – and said she’s already had some “very attractive” job offers.

She added that her new role will “hopefully in the private sector, perhaps something in academia and I’ll most certainly continue philanthropic and charitable causes”.

Read more: ‘I have been blessed’: Julie Bishop announces resignation from politics

Meanwhile, Bishop credited Liberal MP Bruce Baird – ex-NSW premier Mike Baird’s father – and former prime minister Malcolm Turnbull as two of her lifelong allies, but insisted she holds no animosity towards any of her other former colleagues.

It comes after she announced her resignation in February – just six months after she went up against Scott Morrison and Peter Dutton for leadership of the Liberal Party following the ousting of Turnbull.

“I have been contacted by a number of talented, indeed extraordinary, people, including women, who have indicated to me that should I not reconsidered the seat of Curtin, they would seek preselection from the Curtin division of the Liberal Party for that seat,” she said at the time. “Accordingly, I will not re-contest the seat of Curtin at the next election. And I will work hard in the meantime to assist a new Liberal candidates to win the seat.”

Bishop also addressed her bid for leadership last summer, adding that she is also the first female to ever contest for leadership of the party, before saying she looks forward to seeing a lot more of her “close and trusted friends” once her term is over.

She added: “I said in my first speech that I was brought up to believe that entering public office should be one of the highest callings and being able to direct your energy and abilities to the betterment of state and country is one of greatest contributions you can make. That remains my view.

“I leave this place positive about the future, proud of the service I have been able to give, to my electoral, beloved Liberal Party, state of WA and my country.”

Are you sad to see Julie Bishop go?