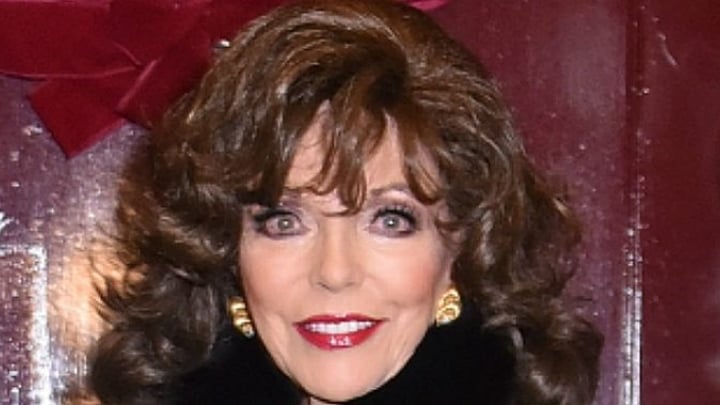 Joan Collins was pictured looking fabulous as she stepped out in a dazzling gold coat in London on Wednesday night. Source: Getty

She was a fashion icon in the 1960s, but at 85, actress Joan Collins still oozes Hollywood glamour as much as ever.

The beauty icon was pictured looking fabulous as she stepped out in a dazzling gold brocade coat in London on Wednesday night. Joan was in attendance to switch on the Shepherd Market Christmas Lights, looking every inch the star that she is.

The Dynasty actress kept the rest of her look simple, sporting an all-black ensemble including a pair of leather boots and fur wrap. She accessorised with a pair of statement gold earrings and wore her brunette locks out in soft waves.

It’s a rare day that Joan isn’t seen sporting a colourful pout, and the actress added a pop of colour with a red lip.

The glamorous look was certainly in stark contrast to her appearance on her latest movie, Gerry. In August, the star took to her Instagram account to share a snap of herself from the film, which premiered at the LA Shorts International Film Festival earlier this year.

The photo shows her in character wearing a loose knitted cardigan and shawl, while sat in a nursing home with a miserable plate of peas in front of her. The incredible make-up team added lines to her face, before swapping her usually freshly blow-dried wigs for a shorter brunette do.

While the 85-year-old is looking fabulous, Joan has always denied having surgery, and puts her youthful appearance down to her healthy lifestyle and trusty moisturisers.

“If people want to think I’ve had surgery, then…” she previously told The Sun. “You can tell [I haven’t] because I have lines and jowls. When I see women around my age I think, ‘Oh, really? My gosh, I look quite a bit…’ I think I look pretty good!”

Earlier this year, her makeup artist of 13 years, Alyn Waterman, shared some of Joan’s best-kept beauty secrets with The Mirror and revealed how she keeps her famous face looking taut with a few tricks of the trade.

Before applying her makeup, Alyn revealed that Joan has a simple trick, which she learnt from Allan ‘Whitney’ Snyder, the famous makeup artist who use to do Marilyn Monroe’s makeup.

“Before doing her makeup for an event, Joan always starts by making sure she hasn’t got puffy under-eyes,” Alyn says.

“My best tip before all events, I get a bowl of ice and cotton pads, place them on my eyes, lay down for five minutes and it works a treat,” Joan told the Daily Mail, in November last year.

Are you a fan of Joan Collins? Do you like her style?