‘Like his daddy’: Gordon Ramsay delights fans with unseen photos of newborn son 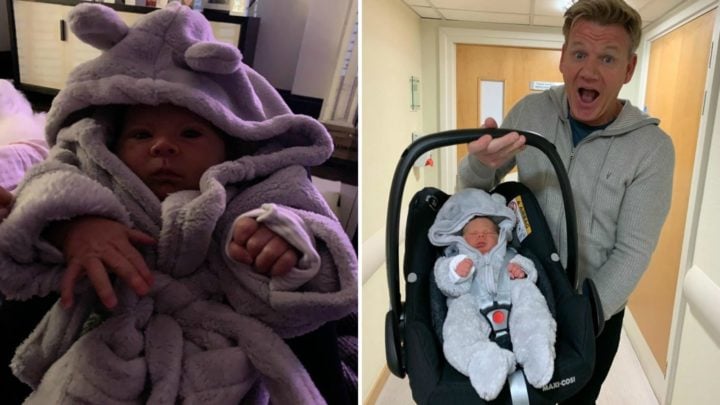 He couldn't be any prouder and celebrity chef Gordon Ramsay has shared a series of unseen photographs of his newborn son with the world! Source: Instagram.com/oscarjramsay

Celebrity chef Gordon Ramsay and his wife Tana only welcomed their son Oscar James to the world earlier this month and have wasted no time in sharing some adorable snaps of their bundle of joy with fans around the world.

While some parents and grandparents do everything in their power to keep their children off social media, Gordon and Tana have actually set their new son up with his very own Instagram page, where a series of photos of Oscar experiencing life have been posted.

In celebration of the Easter long weekend, little Oscar took his very first trip to the beach.

“Mummy took me to the beach for the first time today!! I loved it,” a caption read, alongside a photo of the baby snuggling up to his mother on the sand.

Mummy took me to the beach for the first time today!! I loved it☀️☀️

Fans couldn’t get enough of the sweet photograph. One person wrote: “I miss when mine were newborn. He is just precious.”

A third added: “Babies bring so much joy and unity. Enjoy your little man!”

In another gorgeous snap posted to his Instagram page, the tot was spotted pulling a hilarious face in his sleep.

Other photos show the bub snuggled up in a bathrobe after a bath and taking naps, while Oscar has already posed for his very first passport photo.

“Had my first photo shoot today,” another post read. “Can’t travel until I have a passport photo.”

Had my first photo shoot today !! Can’t travel until I have a passport photo 🌍 🌍

Baby Oscar is Gordon and Tana’s fifth child together and joins Matilda, Jack Scott, Megan Jane and Holly Anna. His arrival was announced on Instagram earlier in April.

“After 3 baftas and one Emmy… finally we have won an Oscar, please welcome Oscar James Ramsay, who touched down at 12:58 today for some lunch,” the Hell’s Kitchen star wrote at the time.

Fans rushed to share their congratulations to the couple, with several celebrity friends leading the way. British WAG Abbey Clancy commented: “Wow what a perfect little baby congratulations both of you !! Not too far behind you guys.”

The Kitchen Nightmares star and his wife first announced they were expecting in an Instagram video earlier this year, which saw each of his four children wishing everyone a Happy New Year, before Tana revealed her baby bump at the end of the clip.

He could be heard off-camera saying: “We’ve got another one coming. Oh my Lord!”

Read more: ‘I love you so much’: Gordon Ramsay’s kids share adorable snaps with new sibling

Meanwhile, Oscar has also been given the tick of approval from his older siblings, who have gushed about their little brother on social media. Twins Jack and Holly both took to social media to share special photos of their beloved brother.

Jack looked very much the proud big brother as he sat cradling Oscar in his arms, while Holly looked absolutely in love as she too sat propped in a chair holding little Oscar close to her.

Oscar has close to 40,000 followers on his Instagram page.

Are you expecting any grandchildren this year? Will you share their photos on social media?