The next Susan Boyle? Singer stuns with emotional ‘A Star Is Born’ audition 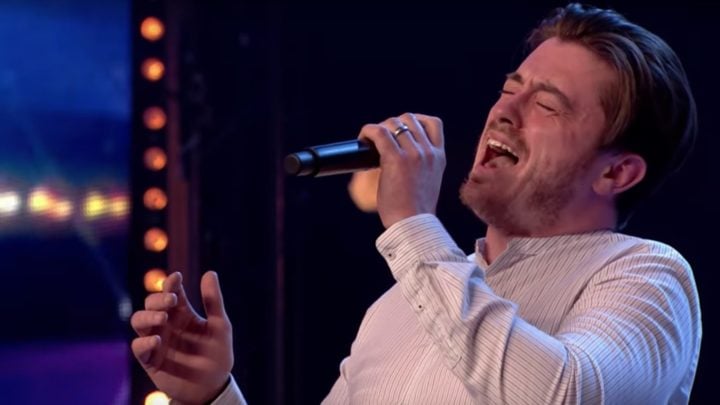 There wasn't a dry eye in the house when Brian Gilligan performed ‘I’ll Never Love Again’ from A Star is Born. Source: YouTube.com/Britain's Got Talent

It’s been 10 years since Susan Boyle first surprised audiences with her incredible Britain’s Got Talent performance and a decade on, another unlikely performer has left the show’s judges in tears.

On Saturday’s episode of the hit reality show, Brian Gilligan was the last contestant to perform in front of Simon Cowell, Amanda Holden, Alesha Dixon and David Walliams and had something to prove not only to them, but to himself.

The Dublin native told the judges he teaches music and drama but once had some success in the West End. Walliams instantly recognised Gilligan from his role in The Commitments.

“I did a couple of bits and bobs but around this time last year, sadly, my brother passed away from a heart attack,” the 32-year-old said on stage. “Since then, it had been a struggle just trying to build my confidence back up.”

He said the birth of his baby boy was what inspired him to audition for Britain’s Got Talent and give it another shot.

Gilligan then performed ‘I’ll Never Love Again’, a song made famous by Lady GaGa in 2018’s A Star is Born. As he belted out the emotional track, members of the audience could be seen sobbing and wiping away tears. The singer himself was emotional by the end of the performance, with the entire audience and all four judges giving him a standing ovation.

‘The first note you sung, I could sense the audience hanging on every word,” Walliams told the contestant. “You sing with such passion and intentity. It’s really compelling and we can see how much this means to you. You deserve another huge chance. You are a superb talent.

Dixon added: “You really did do it justice. You made it your own. You personalised it. It was beautiful.”

Holden, who was holding back tears, described Gilligan’s voice as “phenomenal”.

“I really hope this changes everything for you.”

Even Cowell, who is known for being the “mean judge”, was impressed.

“I don’t think you could have chosen a more perfect song, actually,” he said. “It’s rare that we hear a guy sing that. I also understand what it’s like when you lose someone and then you look at life in a different way.”

He understood why Gilligan took a break from singing but acknowledged his talent and voice.

“Every single person in this theatre wanted you to do well and you did,” he added, before all judges voted him through to the next round.

Viewers at home also praised the singer for his performance.

One person wrote: “After watching tonight’s Britain’s Got Talent, I have already decided who I would like to win – Brian Gilligan. Saw him in the musical ‘The Commitments’ a few years ago, absolutely loved his performance.”

Another comment read: “Brian Gilligan should have had a golden buzzer for me.”

A third added: “This guy Brian Gilligan can sing!!! And so much respect for openly admitting about depression. GO BRIAN!”

Gilligan himself also tweeted after the performance aired.

“So overwhelmed by all the love and support I have received,” he wrote. “I did this not just do this for myself but my wonderful family too.”

What did you think of the performance? Do you enjoy talent shows like this?