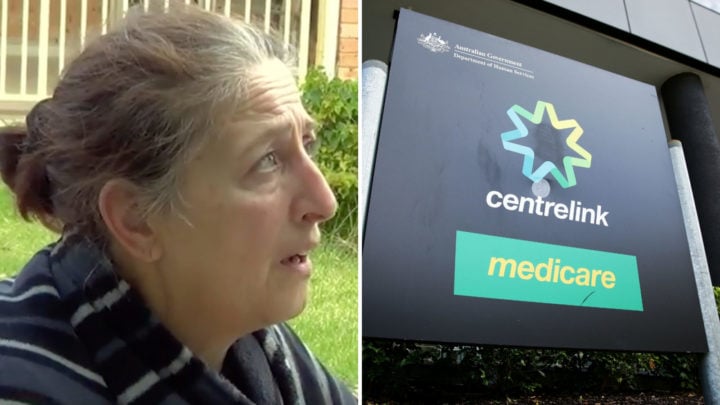 The gran, who pretended to be blind for 21 years to claim disability pension, helped others illegally obtain $137,000 worth of Centrelink payments through a school she set up from her home and in the public toilet of a McDonald’s restaurant. Source: Facebook.com/A Current Affair and Getty

While the pension and Centrelink payments are there for people who genuinely need them, a 62-year-old grandmother has been accused of rorting the system for more than two decades.

Monday’s episode of A Current Affair reported that grandmother Rebecca Assie pretended to be blind for 21 years to receive a disability pension and also helps others rip off Centrelink. The report claimed Assie had been cheating the system since 1990 and also set up a school to teach others to rort the system. Police reportedly found $250,000 worth of cash in Assie’s housing commission home, as well as five different mobile phones she used to give advice to her students.

Reporter Brady Halls jokingly presented Assie with a cane as he revealed Assie was never blind and even had a driver’s licence while she was claiming disability.

“You’ve done remarkably well for someone who is blind,” Halls told Assie outside her home. “You said your doctors in Lebanon told you you were permanently blind. That it was a hopeless case.”

According to the report, Assie has now pleaded guilty to dealing with money believed to be the proceeds of crime and conspiring with others to cheat the Centrelink system. She allegedly worked alongside her late husband to turn their home into a TAFE for others who wanted to illegally obtain money through Centrelink. She would also meet students in the bathroom of a nearby McDonald’s to give fraudulent advice in exchange for up to $2,000.

The couple would fill out Centrelink forms for others and even gave them advice for doctors who would “turn a blind eye” to their fraud. There were occasions where Assie would go to the doctor with her clients in case too many questions were asked.

One client received $66,000 worth of payments by telling Centrelink her child had ADHD when they didn’t.

Assie’s students rorted $137,000 worth of Centrelink payments. Six have been charged and two are currently behind bars. Assie is currently on bail but is expected to learn her fate in the near future.

“We’ll find you, we’ll catch you, we’ll prosecute you and you may well go to jail,” Fletcher promised.

What do you think needs to be done to people who rort the Centrelink system?