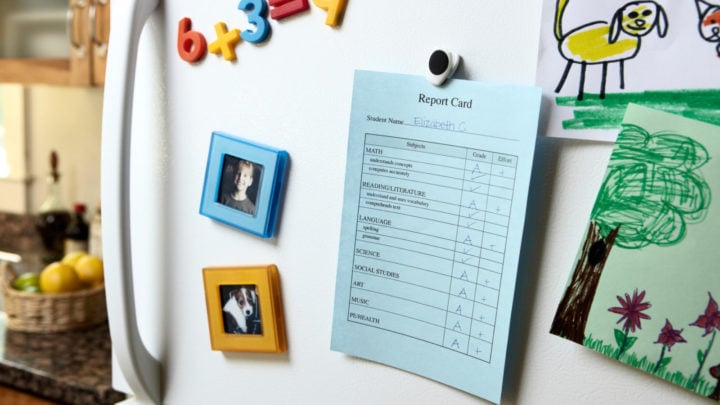 Sally's teacher had written a message on the back of the report card. Source: Getty.

Eight-year-old Sally brought her report card home from school. Her marks were good with mostly A’s and a couple of B’s.

However, her teacher had written across the bottom: “Sally is a smart little girl, but she has one fault. She talks too much in school. I have an idea I am going to try, which I think may break her of the habit.”

Sally’s dad signed her report card, putting a note on the back: “Please let me know if your idea works on Sally because I would like to try it out on her mother.”

Daily Joke: A shy man goes up to a woman at a bar

A very shy guy goes into a bar and sees a beautiful woman sitting alone. After an hour of gathering up his courage he finally goes over to her and asks, tentatively: “Um, would you mind if I chatted with you for a while?”

She responds by yelling, at the top of her lungs: “No, I won’t sleep with you tonight!” Everyone in the bar is now staring at them. Naturally, the guy is hopelessly and completely embarrassed and he slinks back to his table.

After a few minutes, the woman walks over to him and apologises. She smiles at him and says: “I’m sorry if I embarrassed you. You see, I’m a graduate student in psychology and I’m studying how people respond to embarrassing situations.”

A drunk phoned the police to report that thieves had broken in to his car.

“They’ve stolen the dashboard, steering wheel, break pedal, even the accelerator,” he cried out.

However, before the police investigation could get under way the phone rang a second time, with the same voice came over the line. “Never mind,” said the drunk with a hiccup. “I got in the backseat by mistake.”