Through the Looking Glass: The fairy tale magic of Cesky Krumlov 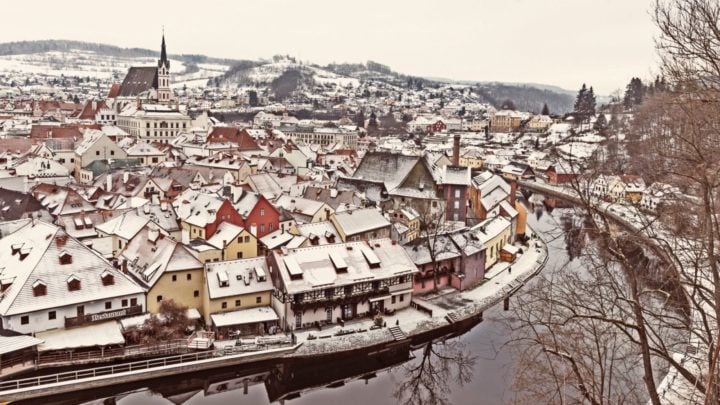 It was an overcast and cold day as we arrived in Passau, Germany. Our driver, Fred, (I’m pretty sure that’s not his Czech name) removed our luggage from the car and bid us farewell and safe journey. Before he departed, he graciously posed for a photo for us. Resplendent in his leather waist coat complete with fob watch bulging from his waist, he looked more like a character from a Lewis Carroll story than our chauffeur with whom we had just travelled 125 kilometres across the beautiful snow-covered mountains separating Germany from the Czech Republic. As he vanished in to the distance we reflected that indeed he might have been related to The White Rabbit, because we had just had a wonderful three days immersed in the magic of Cesky Krumlov, Czech Republic.

It all started with our departure early on a frosty morning from Prague Main Railway Station (Praha Hlavní Nádraží). We discovered the platform for any departing train is not announced until 15 minutes prior, apparently to ensure that customers do not freeze waiting on the platform, but I suspect it was to create a pool of travellers for the various cafes and patisseries within the assembly hall. So, when in Prague, what else could we do but act like a local and indulge.

Now this railway station is quite large — think Central Station, Sydney times two — so once the platform is announced you need to move swiftly and get on the train. It does not wait. No problems, we were travelling First Class but soon, and to our surprise, we discovered that First Class is at the rear of the train, not the front. Scurrying from one end of the platform to the other certainly warmed us up but all was well, and we took our assigned seats within a compartment for six. Snug and warm we departed and wound our way through the snow-covered countryside. What a magnificent way to see the surroundings and what’s more it’s cheap (25 Euros each for First Class)!

Cesky Krumlov is 170km south of Prague on the South Bohemian region of Czech Republic. By train it is a 2-hour 54-minute journey. Travel by bus is arguably quicker but we preferred the spaciousness and smooth ride of the train. It’s a short walk from the Cesky Krumlov station to the village, but we opted for a cab owing to the amount of luggage we carried — turned out to be a good call.

Nothing can quite prepare you for the splendour of the Old Town, which hasn’t experienced major changes since the 19th century. The town centre is a designated UNESCO World Heritage Site, has a charming Baroque appearance and boasts 300 protected buildings in the historical centre.It also has the second largest castle complex in the Czech Republic and the oldest Baroque theatre in the world. Other than cabs and selected delivery and emergency vehicles, no cars are permitted within the Old Town, which adds to the mystery and urges you to walk every lane and cranny to discover all the magic that this town has to offer.

The name Krumlov comes from the natural topography of the town, specifically from the tightly crooked meander of the Vltava river. The word ‘Český’ simply means Czech, or Bohemian. This topography is one reason that Cesky Krumlov is so well preserved. The town was bypassed during the Industrial Revolution of the 19th Century and was also spared any destruction during World War II. A happy consequence is that the ancient feel of Český Krumlov and the beauty of the surrounding countryside have been maintained to this date.

The castle was initially erected around 1240. The town started to grow around the protective fortress. At the end of 17th century the Castle Baroque Theatre was built, the Castle Gardens were renovated and Český Krumlov gained its Baroque appearance. The Castle façade is covered in intricate murals as was the Baroque tradition — there is an ongoing effort to rehabilitate these paintings, making a tour of the castle a must-see experience.

The steps to the castle are found in the Latran Quarter, close to the Lazebnicky Bridge. Do not freak out since the walk to the top is not that steep. At the main castle’s courtyard, you will be able to get tickets to one or more paid attractions including the Castle Tower, Museum and Lapidarium. It’s good to have an idea what attraction you want to see and how much the ‘package’ you want is going to cost. If your budget is limited, then we recommend the castle tower climb as you will be rewarded with views in all directions that will make you appreciate the beauty of the town and surrounding countryside.

The Lazebnicky Bridge connects the Castle precinct to the Main Square and St Vitus Cathedral. This is a favourite bridge with tourists since you can see the castle, the river and enjoy a series of riverside restaurants.

The Main Square is the heart of the city. This big space houses the Town Hall, Plague Column, and the Visitor’s Centre. It is the place to find banks, ATMs and public restrooms. Make sure you take time to appreciate the colourful façade of the many buildings lining the four sides.

We were fortunate to be in Cesky Krumlov at Christmas and were treated to Christmas market stalls in the cobblestone paved Main Square including, of course, copious quantities of mulled wine. There are friendly vendors everywhere in the Square and they all speak English — well, at least enough to sell you their yummy mulled wine. But the highlight for me was indeed Christmas carols performed by the local school children and beautifully sung in no less than four languages!

There is plenty of quality accommodation in Cesky Krumlov. Some have views of the castle which is wonderfully illuminated at night adding to the romance of the town. We chose to stay at the Castle View Apartments, which is near the Main Square and does indeed have castle views from the rear apartments.

Our apartment was also directly across the lane from an amazing traditional Czech restaurant, Krčma v Šatlavské Ulici. This is possibly the worst vegetarian restaurant in Czech Republic, because contemporary Czech cuisine is now very much meat-based. If you love your veggies then brace yourself for potatoes cooked three ways and cabbage, but if you like meat freshly cooked in an open hearth within an intimate stone grotto environment, then you will absolutely love this place. Be warned though, it is very popular, so you need to make a reservation to get the best tables.

One thing we discovered is that if you are in shoulder season (Christmas), then by asking around you may be able to land a 4-star apartment at a 3-star price like our daughter and her family did at Hotel Ebersbach. This is an amazing hotel that combines period architecture with all modern conveniences including bathrooms with marble tiles and heated floors, a heated spa, guest sauna plus an intimate restaurant. They found the service to be very personal as there are only 28 rooms and the staff are very attentive.

Following World War II, Czech Republic was part of the Soviet Bloc. There is now no direct train connection to Germany since the Russians ripped it up in the Cold War period. We needed to travel onto Passau, Germany, in order to collect a hire car. Our travel options were bus, shared shuttle or personal chauffeur. There are a couple of shuttle companies that will drive you to most larger cities such as Vienna, but few that would go to a smaller city such as Passau. We elected a personal chauffeur using Sebastian Tours and that is how we came to meet Fred. What an amazing end to three magical days in Cesky Krumlov.

Have you travelled to Czech Republic? Is a 'White Christmas' on your bucket list?