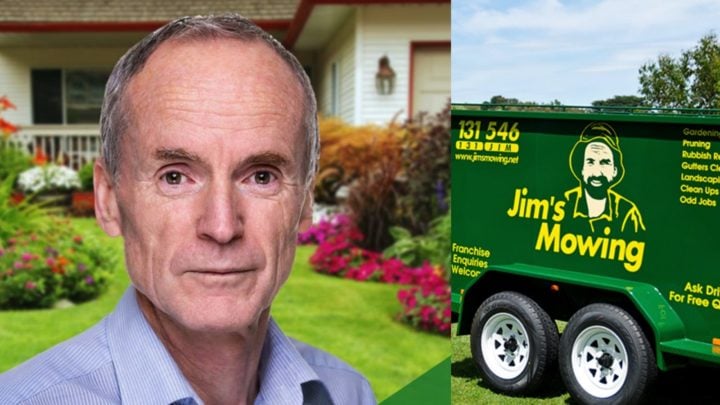 The millionaire behind hugely successful Aussie franchise chain Jim’s Mowing has spoken out in a rare interview to reveal his modest lifestyle – despite his business now being worth millions of dollars a year.

David Penman, 67, better known as Jim, turned a $24 investment into the now well-known $500-million-a-year business, with Jim’s Mowing evolving over the years into Jim’s Group, with over 50 divisions and 4,000 franchises.

But he’s refused to let it change him, and speaking in an exclusive interview with Nine Finance, Jim revealed he doesn’t believe indulging in luxuries all the time is healthy.

“My car is worth about $8,000. I don’t enjoy holidays and my wardrobe is nothing but work clothes,” he told the news outlet. “When my wife and I go out to dinner, we spend about $60 at the local Indian restaurant.”

He added: “Sure I can buy all the books I want and our house is nice, we have a person to come and clean once a week because my wife and I both work, but it’s not healthy to live a life of luxury. It’s an abuse.”

Jim was studying his PhD in history at Latrobe University at the time he first set up Jim’s Mowing, intending at the time to become an academic. However, he told the news outlet that he eventually realised his views were “too radical” for that career path.

His area of interest at the time was biohistory. According to a website set up for this area of study, biohistory looks at the biological imperatives in politics and in the families of monarchies that play a huge role in predicting the rise and fall of society. Essentially, it looks at how the biological characteristics of individual people have altered and shaped history.

It’s largely unrecognised in academic circles so Jim began working on a way to fund his own research – not expecting at the time how successful his mowing business idea would become.

Read more: Survey reveals which generation of Aussies mow their lawn the least

“I didn’t even think it was going to be the business that I’d stick with, you just rattle along,” he told 2GB in a separate interview recently.

But while his work life went from strength to strength, Jim revealed to Nine that it also impacted his personal life – and he went on to have 11 children by four different wives. However, he met his current wife 18 years ago and they’re still happy together now.

“I am a difficult person to love and just needed to find the right partner,” he added to the news outlet.

Have you ever used Jim’s Mowing? Do you think more millionaires should live like this?