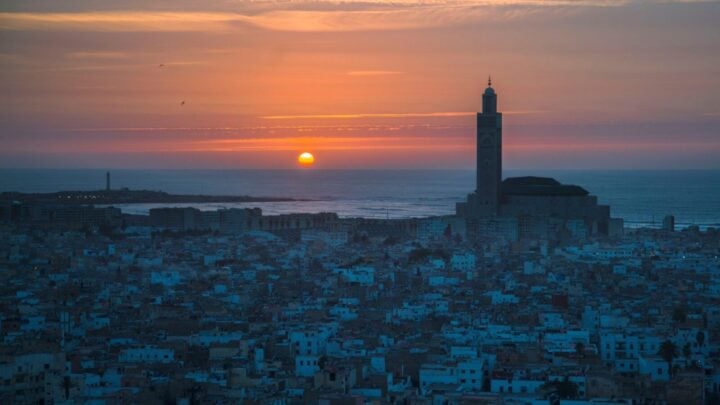 Adrienne and her daughter travelled for more than 30 hours to reach their destination - the bustling Casablanca. Source: Getty Images

After 30 hours of smooth travelling, we arrived at Medina Hostel in Casablanca. Who am I kidding? I hadn’t even left Keflavik Airport before I had almost knocked myself out on the superstructure of the building. Who puts seats underneath bars? The flight from Iceland to Luton was incident-free, but being a full flight ensured we were packed like sardines. Thankfully, the National Express bus to Paddington was almost empty.

My daughter Stacey had mapped out the shortest way from the bus stop to the St George Hotel, our overnight stay in London. What she didn’t and couldn’t know was the route involved dark cobblestoned alleys and many twists and turns. She took my ‘biggie’ as well as her suitcase, let’s name her ‘pinkie’, and I took my carry-on suitcase.

Rounding a corner, we saw the St George Hotel. A guy smoking a cigarette was hanging about the front doorway. He turned out to be the manager, concierge, receptionist and probably owner all in one. He ushered us in, gave us our breakfast box (a muffin, a juice, a muesli bar, and a small shortbread biscuit), most of which we devoured on the spot. We’d eaten nothing since our sumptuous lunch at the Lava Restaurant at the Blue Lagoon. Our room was downstairs, which was a challenge because of the rickety bannisters, but I made it down. Poor Stacey had to manage the suitcases.

Read more: ‘Final days in Iceland: Sightseeing from Reykjavik to the Snæfellsnes Peninsula’

Fortunately, the next morning, the route to the Heathrow Express was smooth and not far. The worst part was dealing with the flood of humanity exiting the station. We seemed to be the only ones wanting to get in. Stacey purchased our tickets just before midnight, but some glitch in the system made them for yesterday and they weren’t accepted! I grabbed a breakfast roll and coffee while she tried to sort it out, but it was quite a mess — they could not change the ticket. She paid 50 pounds for two more tickets!

While eating my roll, I read a sign advising us to have our ticket ready to scan at the airport. Where’s my ticket? I searched everywhere, but concluded I must have dropped it while getting onto the train. I was relieved to see a person at the gate who took one look at me and let me through. I hate machines. You can’t explain you’re a Dumbo who’s lost her ticket to a machine!

I swore I’d stay away from Heathrow, but it’s hard to resist cheap airfares. I pulled out my laptop, phone, portable charger, took off coats etc.

All of the trays came though except my backpack. I was called over to the side and had to empty my whole bag. Oh, no. I had forgotten about the hand sanitiser and hand cream in the side pocket! She searched that backpack thoroughly but found nothing else. However, she did discover a secret zipper compartment that even I was unaware of. It would come in handy for keeping my passport, purse and phone in.

Boarding the Iberia flight to Madrid was straightforward, but not so the flight. The plane struck turbulence just as I was waiting for the loo, and I had to sit down and strap into a seat in the back row for a very bumpy ride. I’d had so many smooth flights over the course of the trip I had forgotten what clear air turbulence was like!

As we walked off the plane, we were directed by a guy with ‘Transit’ written on a piece of paper down a flight of stairs to a waiting bus to be transferred to Terminal S. I wasn’t sure if we were in the right place, but like sheep to the slaughter, we all traipsed made our way onto the bus for a long winding ride around the airport. At least we didn’t have to go through another security check.

Entering Terminal S, I spotted a Starbucks. I deserved a hot white chocolate. I was given an ordinary hot chocolate instead. I was sure I had clearly said “hot white chocolate”, in English. I explained again in detail “hot, white, chocolate” and finally got what I asked for. It was delicious and just what I needed. Stacey couldn’t understand why I wanted hot white chocolate until she tasted it.

Up the stairs and onto our little plane, only four seats wide, and on to Casablanca. On arrival, Stacey converted some Euro into Moroccan dirhams and bought Moroccan SIM cards for our phones. Our roaming plan only covered Europe. One hundred dirham for 10GB sounded pretty good.

With my phone set up and ready to go I set off to collect our suitcases from the carousel. They were not on carousels one to five, which was where the crowd was, but all the way down at carousel number eight. They looked very lonely in this deserted area.

I made a little train of ‘biggie’ and ‘pinkie’ pushing them along quite nicely while my little suitcase was dragged behind — he was the caboose! Toot, toot! I even thought to myself, “I’m losing it,” but I didn’t care. I was so damn tired.

Exiting the terminal we were accosted by dozens of taxi drivers, actually most of them were just the negotiators for the actual taxi drivers. We accepted one for 300 dirhams (about 30 Euro) knowing the price should have been 280, but then he walked away arguing with a guy whom I think turned out to be our taxi driver. I had no clue what was going on. The driver took my phone from me and called the hostel. I still had no clue what was going on. The upshot of it all was cars couldn’t access the medina area where we were staying so he had to make a meeting point with someone from the hostel. But we didn’t know this until we stopped and met a young guy; maybe the son of the hostel owner.

It was pouring rain as we climbed out of the taxi. The man took my two suitcases and proceeded to cross the busy road — at least four lanes if you could call them that — there were cars and motorbikes everywhere. It was a zebra crossing but there were no lights. I was a few steps behind and was almost hit by a car. I was quite shaken and silently cried all the way to the hostel, still keeping my eye on my suitcases up ahead.

My legs were like tree trunks from the two flights, but I plodded on through the rain trying not to step in too many muddy puddles. My suitcases didn’t fare so well. They looked like they’d been around the world several times!

Opening the door to our hostel, we were faced with a long flight of narrow stairs — just what I needed. Up to the first level where I hoped our room was, I signed us in and then became disappointed when I had to go up another two flights of stairs to our room.

It was not what we’d been used to; the kitchen, and the common lounge room outside our bedroom were open to the sky (and the elements) and a blue tarp was drawn across. There was an iron staircase going up to the roof just outside our room, but I didn’t venture any further up than I had to.

I collapsed onto the bed, tried to elevate my legs as best I could and slept till 10:30am! Apart from a couple of hours’ sleep in London, we had been travelling for 30 hours!

What is the longest trip you've ever done? What tips do you have to prepare someone for a long trip?