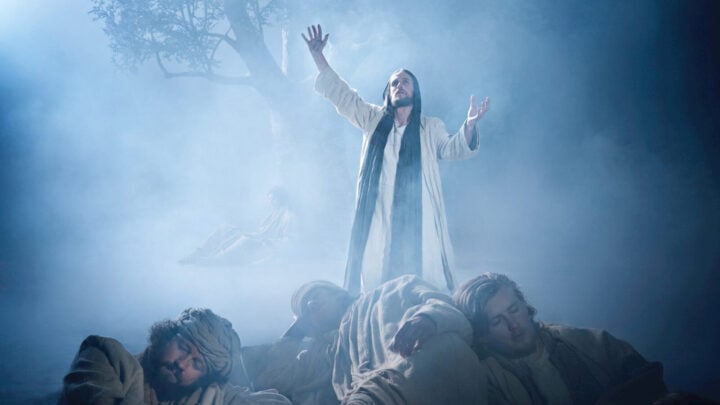 Picture this: it’s 1633 in the tiny Bavarian village of Oberammergau. You’re in the midst of the Thirty Years’ Religious War being raged within the Holy Roman Empire. The Plague is ravaging Europe. In a flourish of hope, you and your fellow villagers vow to act out the suffering, death and ultimate resurrection of Jesus Christ, in a production which will be staged once every 10 years, for eternity. In these dire days in Europe, it becomes a play of passion and a story of survival.

This is a travel tale about endurance with a daring dollop of entertainment. About how one small German village at the foot of the towering Kofel mountain and surrounded by the yawning Ammergau Alps, transformed tragedy into triumph.

For four centuries, once every decade, travellers have trekked to this verdant village in the emerald Ammer Valley, one hour from Munich, to witness this long-running production. In 2020 it was cancelled due to the global pandemic. But this town has already proven it won’t be defined by a plague. In 2022, almost 400 years since the original Passion Play was launched, travellers have the rare opportunity to visit again.

With its cacophony of consonants and vowels, Oberammergau is a mouthful for non-German speakers. But its history and commitment to story-telling sings volumes about this destination and its inhabitants. Wrap your imagination around this adventure you’ll never forget.

Pull up a perch before the open-air stage of the Passion Play Theatre and watch history unfurl in this five-hour performance. More than 2000 participants – almost half of Oberammergau’s population – enact the story of Jesus of Nazareth, from his entry into Jerusalem, until his death on the cross and ultimate resurrection. Lose yourself among the soulful sounds of more than 100 choirists, and an evocative orchestra of 55 instrumentalists. Seeking a signature stay? Your Oberammergau village accommodation will include a night with someone either directly or indirectly involved with this production. Yes, you may be spending the night with Jesus.

This jaunty journey begins in either the Czech Republic or Spain, with Travel at 60 offering two ports from which to launch your European adventures. Both departing in September 2022, choose from an inspiring itinerary which takes in Germany – and Oberammergau – as well as Austria and Switzerland.

The Prague departure begins with dinner in the fairy-tale Old Town where you’ll wander the cobbled streets of the Czech Republic infused with history, winding your way to the 1000-year-old Prague Castle. The Barcelona departure will see you admiring the exuberant artwork of Spain’s favourite architect, Antoni Guadi. On this departure, you’ll also journey through France. While both trips take in Austria and Switzerland, the destinations differ slightly with the Prague departure including 16th century Rothenburg, magical Munich and its high-gabled houses, the Alpine city of Innsbruck, swanky St Mortiz, the sparkling lakes of Interlaken and Lucerne on to Zurich.

Should you choose to depart from Barcelona, you’ll cross into Lourdes and another of the world’s most popular places for pilgrims, into the medieval Brive La Gaillard, through the Burgundy capital of Dijon, over the Swiss border into enchanting Engelberg and on to captivating Vienna.

Romance? Both adventures serve this in spades, no matter from which city you choose to depart. The ultimate destination darling on this journey remains Oberammergau. While much is written about the Passion Play, the village itself is as beguiling as the entertainment. Peppered with artistic facades, wellness treatments for which Europe is renowned, and quintessential German hiking trails, you’ll adore this region as much as the play itself.

Travel at 60 Travel Consultant Jenny Thomson, who experienced the Passion Play in 1984 for a one-off event to celebrate its 350th anniversary, recommends this once-in-a-lifetime opportunity.

“It is an inspiring production showcasing the history of the world (based on the Bible’s version of creation) beginning with creation through to the death, resurrection and ascension of Jesus Christ,” she says.

“It is delivered in German (headphones available for other languages) and is full of colour, music and drama.

“Costumes are designed to be as authentic as possible and live animals and amazing props enhance the production.”

She describes Oberammergau as a ‘small, picture-postcard village where the houses have window boxes full of colourful flowers and murals on the walls.’

“The village itself is quaint and the people extremely friendly. As part of your holiday, you stay in the home of the locals so you could be staying with an angel, a shepherd, King Herod or Pontius Pilate.  And the food is always home-cooked and delicious,” she says.

“One of the highlights for me was waking up on a beautiful Sunday morning to nothing but the sound of a cowbell clinking and the dew forming droplets on the wildflowers soaking up the sunshine.

“I would highly recommend Oberammergau.  A beautiful, small country village surrounded by snow-capped mountains, delightful people and an experience you will remember for years to come.”

Travel at 60 Chief Commercial Officer Wendy Harch says for those uncertain about booking international travel for 2022, these tours offered extra comfort and confidence including:

“After two years of waiting, pent-up demand for this event is extraordinary,” Wendy says.

“While many Australians are currently on the fence, European travellers have no such reservations.

Have we ignited your travel passion yet?