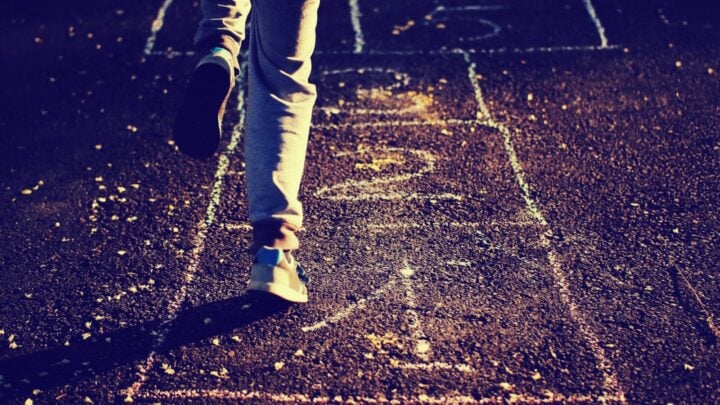 Julie says with today's hands-on style of parenting, it's hard to believe some of the things that were 'normal' for kids in the '60s. Source: Getty Images

This is a little trip along nostalgia lane, to days that shall probably never come again. In our old primary school playground, we had a huge expanse of asphalt. It was so boiling hot, standing there in school assemblies, raising the flag and singing, ‘God Save the Queen’.

But at play time, we had such fun, whatever the weather. Anyone who owned chalk could draw hopscotch, or ‘hoppie’ as we called it. We could amuse ourselves with games of marbles. The boys, in particular, loved that. We junior girls played with jacks, sometimes coloured plastic, sometimes the old knucklebones from a roast.

For added play time fun, our school had some playground equipment, which would now be regarded as quite hazardous. We had monkey bars, with no soft landing for clumsy kids. I broke my arm in a mishap. A plaster was a badge of honour, all my classmates signed it or wrote amusing messages. It was all normal for those times. These days the mother’s club would be crucified for allowing such japes!

A lot of us loved playing leapfrog, I do not notice any children enjoying that now. Even my sisters and I played cowboys with toy cap guns, with realistic sound effects. Some boys had ‘spud’ guns, which were supposed to be banned. They chased each other and birds. We had no internet or smartphone, but made our own fun. I notice some current schools wish to establish phone-free days, so children can play.

Some time later, toy guns went through a politically incorrect phase, we were not supposed to allow little boys to play with toy guns. It was supposed to damage their development. Even worse than the guns, as young primary school children, we had carte blanche to walk to the local milk bar, to spend our pocket money on fireworks, with matches to light them!

Our mothers assumed we would not burn down the district, playing with fireworks in the long grass and trees, on the verge of our gravel road.

That was an accepted part of our childhood, enjoying Tom Thumbs and bungers. On Guy Fawkes, or ‘cracker’ night, we had a bonfire in the backyard, and delighted in a display of Roman candles, or Catherine Wheels, finishing off the dark evening with sparklers. Did that damage our development? It was all simple play, making our own fun, in this trip along nostalgia lane.

What play time mischief did you get up to that would be frowned upon today?