Wigging out: Revisiting the wacky hairstyles of our youth 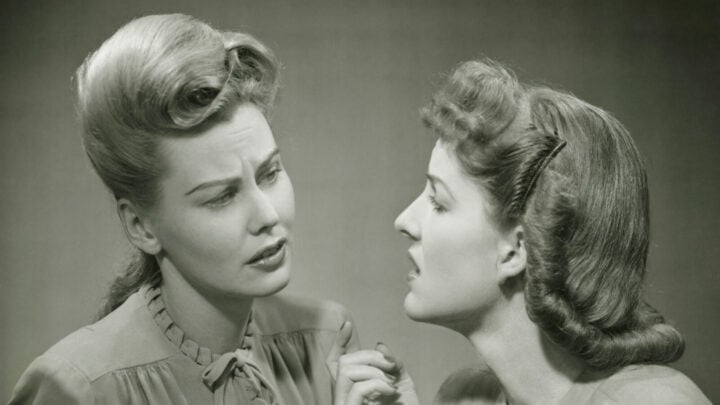 Some of the hairstyles we grew up with were a sight to behold. Source: Getty

I’m looking in the mirror at my functional hairdo. It’s now a greyish blonde, and can’t seem to decide what colour it is. But, it’s simple, short, and thankfully I still have lots of it. And although it’s not real trendy, I do appreciate the ease of keeping it tamed.

But growing up, it seems like I spent much more time caring for my hair, and I think other people did as well. I remember watching those ads on television, and all types of hairdos were being advertised. Both men and women were always coiffing their locks.

Thanks to having older brothers and sisters, I recall many of these hair concoctions. Let’s look at some of them.

I had one older sister, and she seemed to have invented the Flip. She would wear those nasty rollers to bed, and I’m sure that was the start of her migraines, I tried wearing rollers a few times in my teens and I felt like I was undergoing cerebral acupuncture. Maybe that’s why I became so creative. All those roller wires sticking into my head turned me into a goofball.

This was highly popular with many women, including Dolly Parton. The hair was combed backwards, and if you were lucky, it would look like the foil used to cook Jiffy Pop Popcorn. Just add salt and butter and you were good to go.

My partner has pictures of her mother wearing this hairstyle. I wonder if it came with bug spray? To bee, or not to bee, that is the question.

Who remembers the Page Boy? This one was sleek and stylish, tracing the curve of your face. It looked pretty simplistic compared to other monstrous styles that were popular during the 50s and 60s.

Who wore the Pompadour? It was worn by both men and women, and has made a resurgence today. Elvis popularized the style, but it was actually popularized by truck drivers. Once upon a time Elvis drove a truck. Women now wear this hairdo as well, including my partner. It’s pretty slick, and looks fairly easy to manage.

I don’t remember the Poodle Cut, but I’ll bet it was a doggone hit. Could you get one when you groomed your pooch? That would be convenient. I wish there had been an Irish setter haircut because I probably would’ve gravitated to that.

Twiggy epitomized this style. Her hair looked as skinny as she did. I guess it was popular among anorexics.

Who recalls the Waterfall? Brylcreem was a must to keep your unruly mop in place. All of my brothers had this hairdo. Their girlfriends probably had to wash their hands if they touched it.

Many men sported the Ducktail, which accompanied the girl’s poodle skirts that were fashionable at that time. Those who wore this style were known as “greasers.” I think of West Side Story when I imagine this hairdo.

Crew cuts were also the norm, along with the flattop. With the crew cut, the hair was buzzed into a short fuzz all over the head. It was also known as the “butch haircut.” With the flattop, the sides were shaved close to the head, but the top was slightly longer. You could lay a plate on the top of a flattop. It came in handy if you were entertaining, and a side table wasn’t available.

Getting into the ’70s, men and women began growing their hair to reflect the politics of the day. Hair was everywhere, which gave us all a reprieve from shaving. Some women even braided the hair under their arms!

Hair styles have changed quite a bit since I was growing up. What hairdos do you remember, and what did you go through to achieve that perfect look.