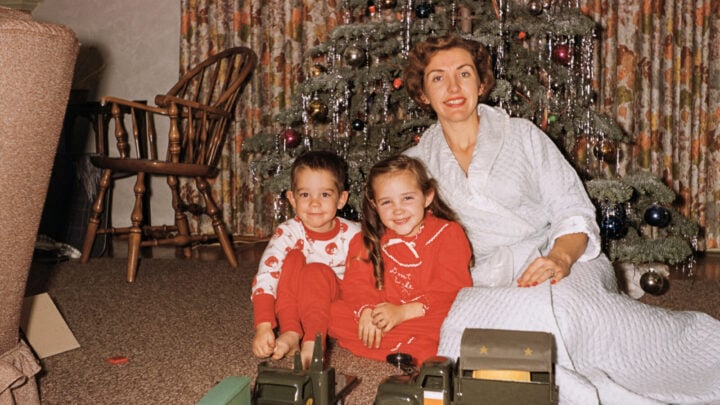 A time before Christmas lost its magic. Source: Getty

Long ago when I was a little girl in the 50s, Christmas was a magical time of the year. Coming from a working-class family with four girls, we appreciated the simple gifts we received. We also knew no different as our peers also came from working-class families. There were the smells of fruit cakes cooking and Christmas lilies everywhere.

It all started with a lot of secrecy. Mum would have the old Singer treadle sewing machine going when we girls were supposed to be asleep. She would be whipping up complete doll’s clothes wardrobes as she was a wonderful seamstress. Our old china dolls would be taken to the doll’s hospital and would come back with a new wig stuck on. It was like an annual resurrection. We only received one large gift. Some years it was a refurbished pushbike. Others a wicker doll’s pram purchased secondhand and repainted by dad in the shed and set up with new bed linen by our clever mum.

We loved and treasured our gifts. Our stockings on Christmas morning had an orange, a few walnuts, and maybe a puppet, picture book, or crayons. And a small chocolate bar. Breakfast would be leisurely as we would have been to midnight mass the night before where the nativity scene was set up by candlelight and incense was in the air, with the candlelight giving it a mystical quality that the harsh light of day would dispel. Mum would cook a roast lamb, followed by a trifle. She would have a glass of sherry, her yearly treat, and giggle with her face all flushed. Dad would have a beer, and we would all play with our new toys. The bigger sisters would curl up with their books and we younger girls would dress up our dolls. Christmas carols played on the old wireless and we waited for the Queen’s Christmas message.

The older we got, sadly the more cynical we became. Christmas became fraught with tension and teenage hormones. We never appreciated the family time and were often resentful about being forced to do the ‘family thing’. We were selfish little brats, and I look back and wish I had them all for another Christmas, as sadly most of them have passed away. Now I am the Mum and the Grandma. And sadly the kids seem to want more and more as the true meaning of Christmas is often lost in the glitter, tinsel, and consumerism.

But, having my children and grandchildren together in one place is my greatest gift – it’s a time we treasure together. A waft of Christmas lilies, freshly cut pine trees, or fruitcakes cooking will take me back to those simpler days.

What are your memories of Christmas? Was it a special time for you and your family?

What are your Christmas memories?