‘The first penis I ever saw was a flasher’ 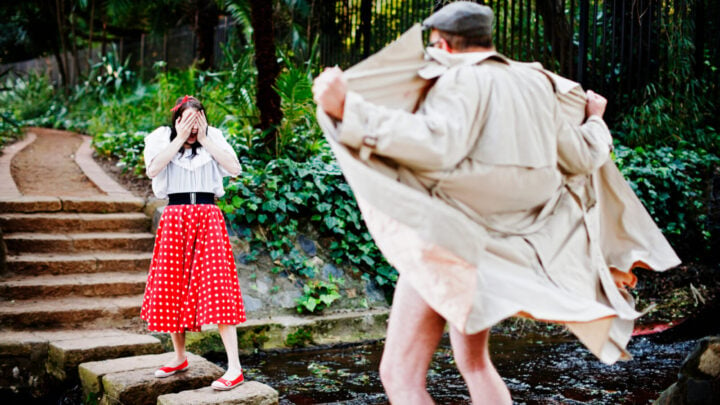 This blogger talks about her first sexual encounters. Source: Getty

My parents only had sex four times, as they had four children. I could not imagine them having sex once I realised what actually happened. Ugh.

But prior to that, I had to use my imagination to work out how babies were born, and how they got to be made. So, I decided cats married dogs and had guinea pigs. Cows married horses and had sheep. Weird logic. And mothers and fathers – well, the mother had something from the man injected into her arm. More strange logic.

I had no brothers so was not aware that they were really different down there until the boy next door whipped his penis out and peed on my feet. We were about five. Then my curiosity got the better of me and I started asking questions. But mum and dad were very close-lipped about it. One day when playing in Woolston Park with my friends I went into the dark and gloomy ladies’ toilet. There on the wall was a diagram of a penis, and a vagina. With the interested help of my friends, we worked out which part went where, and so felt a bit happier about our knowledge, but realised we better not tell our parents.

One day when walking alone through the park an older boy on a bicycle asked me if I wanted a root. “oh no” I replied, “it might be poisonous”. So off I went home and told mum. She unplugged the iron, picked up a broom and rushed down the street to chase off the “filthy bugger”. She never caught him, but a few other angry mums came out in their aprons and curlers to look for him. At that stage, I had no idea what the fuss was about. I was more worried about stinging nettle.

Ah, but it got more serious when I actually saw my first penis. It was amazing that I did as I was so short-sighted. I cycled through the park to the diary (Corner shop) to buy ice creams for the family. A car was parked by the side of the road and a man sang out to ask for directions. Being a good polite child I walked over. He had no pants on and the strange thing between his legs looked like an uncooked pork sausage. He asked me to get in the car. “Oh no,” I said, “I need to go to the shop”. So off I rode, thinking what a funny man. When I told the people at the shop the police were called and Mum and Dad arrived. I was only worried about the ice creams melting and wasn’t sure what the fuss was about. Dad was growling about getting the ‘filthy bastard’.

As a teenager from a staunch catholic family being an unwed mother was a fate worse than death, so I didn’t let any boys near me, or if I did, it was at arm’s length. It was only when I was older that I realised what really happened during sex, and found it all a bit of a letdown when done incorrectly.  Thank goodness I had a few years later to work out the “ins and outs” of it, and I still smile when I think of cows marrying horses and having sheep.