‘Snakes are part of Aussie life but that doesn’t mean I have to like them!’ 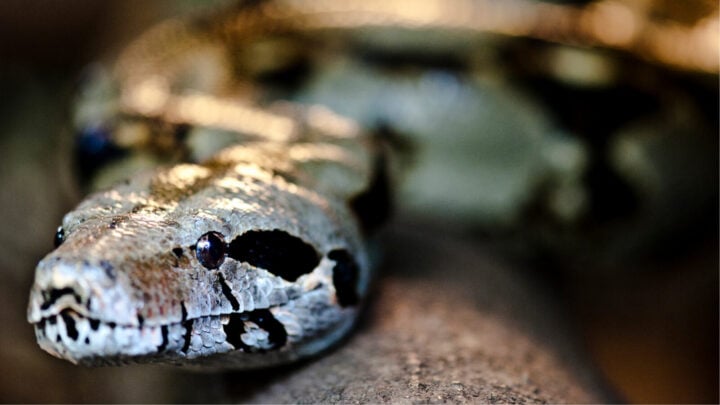 Despite living Down Under all his life, this community writer didn't come face to face with a snake until 1995. Source: Getty.

Spare a thought for poor Indiana Jones. There’s Indy, clawing his way through carpet-thick spider webs and vine-entwisted rain forest, dodging poison darts and psychopathic Nazis and 2000-year-old booby traps to rescue some priceless antiquarian artefact. And his goal? To preserve it for posterity in a spick-and-span museum (no worries about PC anti-cultural appropriation there), but what comes along to spoil the party – a snake.

“I hate snakes.” Such were Indy’s immortal words, gritted out as he found that his refuge in a tiny biplane cockpit was to be shared with a hissing monster from the Underworld. I know how he feels. Snakes have been a shadow gliding through my life, right from the time I was warned by parental concern not to venture into the bush behind our home at Gladesville. And then proceeded to do so.

Yet, I find it remarkable that Indy could barely turn sideways without a snake lunging at him, while I trudged, ran, or stumbled through undergrowth in many localities without ever stepping on a single terrifying reptile.

Indeed, the closest I ever came was at the Rangoon Zoo where I paused at the fence corralling in a cluster of what were labelled “king cobras”, whereupon one launched itself from the heaving mass straight at me with the force of a Trident missile. Never in the course of human history did so few owe so much to so little wire mesh!

I found myself musing on this incident while watching a David Attenborough natural world program on the Indian state of Karnataka when the camera paused on one of the most sickening sights imaginable – a king cobra swallowing whole another snake, twisting and turning to expedite its meal southwards. Yuk! Again, I thought of poor Indy in the cockpit.

Despite my Garden of Eden-type revulsion, I never actually came face to face with my nemesis. Until I moved to Mount Kembla in May, 1995. Mount Kembla, for those unfamiliar with the geography of the Illawarra region of New South Wales, is a former coal-mining village that was the locale of the greatest single loss of life on land in Australia, the mine explosion of 1902 which killed 96 souls.

At the time we moved there, however, the mines had been long closed, so that the wildlife – and their predators – had been undisturbed for 25 years. The result was that red-bellied black snakes were seen rather too frequently for my taste, especially when I saw one slithering into a private letter box on the village’s main thoroughfare.

However, people got used to red-bellies, which were reputed to be slow and passive. (I might add, that when I put this theory to a local bushie, one of whose trades involved collecting rocks for suburban landscaping, he laughed derisively: “You bail one up on its turf and you’ll see how passive it is.” I remember this comment as if it were yesterday.)

So, as I said, although I lived in perpetual horror of treading on one of the blighters, it wasn’t until I went overseas in September 1995 that my “wish” came true.

Thoughtlessly, I had failed to register a number of salient facts: that spring is the mating season for snakes; that snakes are especially aggressive in spring; that we lived on the edge of a national park of near-pristine bushland; and that we were leaving our home unattended at this most dangerous time of the year.

I should have seen the danger signs on our return, especially when our cat which used to roam through the adjoining bushland, returning, post-haste, with its hair fluffed up like a gigantic cumulous cloud. But I continued on in my dream-like state, regardless. Until, my wife, a veteran of many encounters with brown snakes on her parents’ wheat property near Tamworth, decided to peek under some sheets of corrugated iron near our back fence.

Suddenly, a horde of silver snake-lets emerged into the sunlight. Puzzled, she rang WIRES to identify the culprits and was told they were tiger-snake young, who get their ominous stripes when they reach a certain stage in their development. Although passing on interesting zoological info to me, I hardly heard her because I was focused on one inalienable fact: that if there were 40 snake-lets in our back yard, where was Big Mama?

Forewarned, I shook off my summer doldrums and went to work with a frenzy, hammering bird wire along the back fence, staking it into the ground, to prevent the creature, itself, from getting into our yard, even if its motive was the most benevolent of family reunions with her young now trapped on our side.

I stood back, eventually, to survey my handiwork, convinced that a fortress on the scale of the Maginot Line (note the irony!) had been erected in double-quick time. And then I heard dead leaves rustle, softly at first, then louder, then louder still. To see the largest green-and-gold-striped monster moving inexorably along the other side of the fence. It was skin-crawling stuff, but at least, I thought, that thanks to the bird wire, she’s there and we’re here. And that, ultimately, is all that mattered.

I awoke early next morning, still in the congratulatory after-glow of my energetic response when I realised that I had stretched bird-wire across a small opening above the top rail of the fence, on which our cat used to bound in its hurried return from the bushland beyond. Rather than building a piece of siege warfare, I had ensured that when the cat returned in flight, it would hit the bird-wire and tumble down into the loving coils of Big Mama.

It was a stinking, steamy morning in February as I fought through the limbs and fronds of a native fig tree that grew against the back fence. In record time, I had hammered into place three dummy paling tops that closed the gap and hopefully saved the cat’s life.

I again surveyed my handiwork in the sweltering heat, satisfied that I had sealed a vital breach in our defences, when I heard a blood-curdling sound. From out of the dense mat of polished fig leaves, somewhere, possibly as close as 30 centermetres from my face, came the sound of a snake. Invisible in the foliage.

At one level, I was able to say later, authoritatively, that a snake’s hiss does not sound like a sibilant stream of Esses at all. No, it’s more like a deep-throated, threatening haaaaaa, as in “hah, I’ve got you now”. At another level, that morning I did set a new Olympic record for running backwards. And what a nice touch if Harrison Ford had been on hand to present the gold medal!