Part 3: ‘My trip to the WW1 fields where my grandfather perished broke me’ 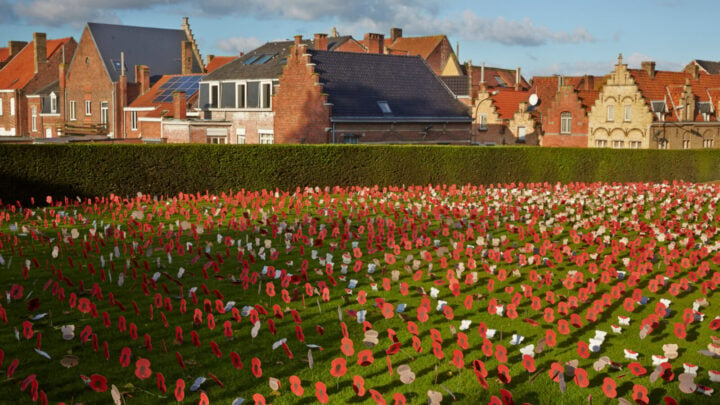 A field of poppies honour the fallen at Menin Gate in Belgium. Source: Getty

Back on the bus we go past a house of someone Sharon knows. She explains how undermined everything is with the trenches and such, then proceeds to relate how, in 1999, the lady of the house sank up to her neck in water when she got caught in an old trench and was lucky to be rescued from the mud in time. Just four years later their bedroom sank 15 centimetres.

We pass Polygon Wood, where almost 6,000 Australian soldiers were killed or wounded in battle. It changed hands 15 times and we’re reminded that 35 bodies were recovered last year, 70 the year before, five of them Australian. They believe they have their identities narrowed down to seven possibilities.

At Hellfire Corner we are reminded that, on average (dwell on this time frame) a shell fell here every five seconds.

We stop at the Messines Ridge. The effort that went on here was extraordinary. This time, with the much smarter Canadian Plumer in charge, the allies had dug 24 tunnels, the longest 750 metres, and set mines at the end.

They then bombarded the ridge for a fortnight and the Germans returned fire. Then, at 3.00am on June 7 they stopped and, unbelievably, so did the Germans. They thought the Germans might have wind of what they were about to do but went ahead anyway.

At 3.10am they detonated the mines. With 20,411 kilograms of Ammonal and 3,175kg of guncotton in each hole, 19 of them went off. To this day, it remains the biggest man-made earthquake ever.

British historian Lyn MacDonald collected first-hand accounts in her book They Called it Passchendaele – the story of the third battle of Ypres and of the men who fought in it.

Lieutenant J Todd of 11th battalion, Prince of Wales’ Own Yorkshire Regiment, told MacDonald: “It was an appalling moment. We all had the feeling, ‘It’s not going’ and then, the most remarkable thing happened. The ground on which I was lying started to go up and down just like and earthquake. It lasted for seconds and then, suddenly in front of us, the Hill 60 mine went up.”

Eighty-five thousand troops attacked the ridge, 7,000 were lost but, for the most part, the Germans had been stunned by the massive 40-tonne blast and it was the single most successful battle of the entire war.

Of the five that didn’t detonate, two had already been overrun, the Germans had discovered one and two misfired. In 1955, a tree was hit by lighting and detonated one of them in a mighty explosion. There’s still one out there somewhere.

Hitler served here, was a brave soldier, was awarded the Iron Cross 1st and 2nd class and lost a testicle when shot. He worked for a field hospital for four years and was never promoted because he wasn’t deemed to have leadership potential.

In the next village was man named Winston Churchill. As the Americans entered the war, a man named George Patton also arrived. Of course, just across the way was a man named Erwin Rommel. Within an 8km radius these men fought against each other, 30 years before history repeated itself.

Our next stop is the Menin Gate. It’s here that my grandfather is commemorated. It’s from this gate that the sculpted lions were removed in the 1930s by a grateful mayor of Ieper and now adorn the entrance to the Australian War Memorial in Canberra.

I locate my grandfather’s name.

They have to send one of the Canadians from the bus later to collect me as everyone is waiting. Later, Sharon will remark that it seemed to have affected me and I freely admit that it did.

In fact, I lost it and was shocked at how emotional I got. She asks me if she could place a poppy at the site the next day. I thank her profusely but decline the offer. She later asks my grandfather’s name, in such a way that I suspect she is going to put one there anyway. Later still, I say that if I returned the next day there would be a poppy there anyway would there not? The way she looks at me indicates clearly that there will be.

We next visit a trench site at Ieper, excavated by volunteer diggers and filmed by the BBC, which is why it was saved from industrial development. Here you can really get a feel for how awful it must have been to actually live here. There were two adjacent trenches. On one side you went to the front, on the other the bodies were brought back. It didn’t do for the fresh troops to see how they were going to end up.

At this site, no larger than the house where I now live, there’s a plaque indicating that they have unearthed 155 bodies. Sharon said it’s now out of date. In fact it’s now 205. She was here when they unearthed the 200th. She is not only passionate about this tour, she is emotional. You can see the welling in her eyes and she storms off to the bus banging the sides of her hands together.

I later comment to her about how amazed I am that someone who has been doing this for 17 years, with a break only for her daughter, can still have get so emotional about the role. She blames it on being a female, but it’s more than that.

Our last stop is where Valentine Joe Strudwick is buried. He lied about his age, enlisted when he was 14, was wounded, went home, came back again and died when he was 15. School children are often shown this grave, many older than he was when he died. That’s why there are a lot of poppies here.

It’s also where John McCrae spent much of the war, having enlisted when he was 40. He was a doctor and worked hard, sometimes up to 72 hours straight. Eventually he ended up on the Somme where he died from the flu, bought on by overwork but, before he went he wrote a little piece. That piece today is learnt by rote by his fellow Canadians in nearly every school in their country.

Sharon later tells us that poppies grow on fields that are disturbed and where there is no competition. Hence they flourished in this area during the war.

In Flanders fields the poppies blow
Between the crosses, row on row,
That mark our place; and in the sky
The larks, still bravely singing, fly
Scarce heard amid the guns below.

We are the Dead. Short days ago
We lived, felt dawn, saw sunset glow,
Loved and were loved, and now we lie,
In Flanders fields.

Take up our quarrel with the foe:
To you from failing hands we throw
The torch; be yours to hold it high.
If ye break faith with us who die
We shall not sleep, though poppies grow
In Flanders fields.

Did any of your relatives fight in the Great War?