Part 1: ‘Retracing my grandfather’s dying footsteps in the muddy fields of WW1’ 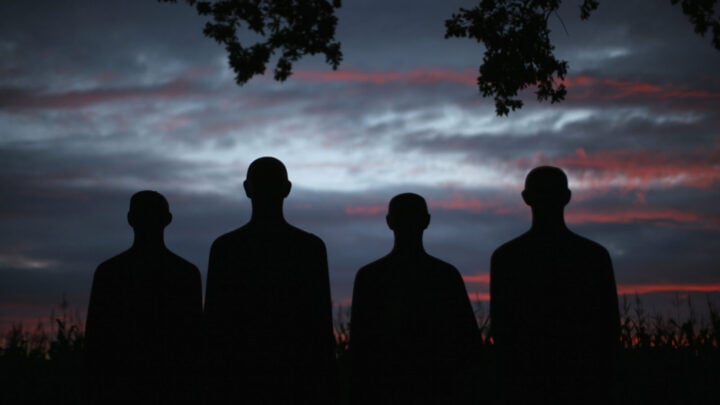 The sun sets behind a bronze sculpture of four figures in Poelkapelle, Belgium. Source: Getty

I was born and raised in Teralba, a suburb that still seems apart from the rest of Newcastle. Twenty-one years passed, during which time I would frequently visit my grandmother on my father’s side.

I still recall trips to Newcastle, a big occasion for a young lad, on the 363 bus from Speers Point. Gran lived alone at Boolaroo, but I never made much of her being alone. No, she was just a quiet lady, generous of spirit, and it was such fun listening to Blue Hills on the radio with her. But there was something never discussed: her missing partner. That’s the way society was at the time. All I grew up knowing was that he had died of a shell explosion somewhere in a country called Belgium.

Much later in life I inherited some pussy willow leaves with poignant messages written upon them. “There were some nice places but none so nice as home”, “To Bessie from W from far across the sea 1/8/1916” and “From A55 to ‘Kelmont’ where would I sooner be” are some that I still hold.

It really wasn’t until my brother found his inscription at the War Memorial in Canberra that I became interested in my missing grandfather. I had been to the memorial a few times and never bothered to look for him; now, somehow, in my later years as the seventh decade rolled around, it seemed important.

I gathered more details and the thought came into my head that on my next trip to Europe I should make the effort to see his name on the Menin Gate at Ieper, formally Ypres, in Belgium, one of the most famous battlefields in history. I wondered just how cathartic an experience it would be.

The following is how it panned out when I boarded the Quasimodo Tours bus, and I quote an email I sent home at the time:

Today’s the day. It was with some difficulty that I slept last night. I’m wondering how I will react to all of this.

Odd, I thought, all I’m thinking about is myself and not what he might have gone through. I note there’s a thick fog outside the window and wonder what would have happened on a day like this. They wouldn’t have been able to see each other.

I remember too, yesterday, the Dutch couple I met up with pointed out an earthy, wet field as we rode along and called “polders”. It was from this natural, clay-based material, that the special church at Lissewege, on the coast of Belgium, was constructed.

I had visited the church earlier; unbeknownst to me it is mentioned in the Da Vinci Code, something to do with the devil’s head carved in stone I believe.

The fields meanwhile were sodden, as they had been in the war. I eyed off the slush and thought how horrible it must have been living in the goo, where every footstep was an exercise in itself, mud stuck to your kit and never left it, the thought that tomorrow would only bring more of the same.

Now it’s today and I’m on the tour bus. Strangely, in some ways, our tour guide is an ex-pat Aussie, she’s an attractive middle-aged female named Sharon and she’s been doing this since 1990. She does it because she is passionate about the World War I. Very passionate.

Other members of the tour are mostly English, though there’s also a young Canadian couple.

Sharon begins by explaining the war’s origins, how Austria, Hungary and Germany were ready to expand and had taken steps already so that when the crown prince of Austria was assassinated in Sarajevo it was the excuse they were looking for to take action.

The Germans had a plan to knock off Belgium in six days then run riot through France in about a month. This would allow them to send most of their troops to Russia, which they estimated would take six weeks to mobilise.

In the fields to where we are travelling, it all went horribly wrong. The tenacious Belgians held out for 32 days and flooded fields to delay the advance. The Germans took Ypres (now Ieper), relinquished it, and never got it back. The Allies held 10 per cent of Belgium in a small triangular shape, the salient that stayed.

Our first stop is the Passchendaele Ridge. It’s far and away the highest piece of ground yet it’s only 56 metres high at its peak. The 40 square kilometres were attacked by the British.

For every 1m gained, and I ask you here to imagine how wide the room you are currently in is, probably around 4m, they lost 35 men. Imagine in your comfortable room there are 140 bodies lying limp. This will give you some idea of what is to come.

In this area of Belgium there is not a building, a tree, or a blade of grass older than 85 years.

At Poelkapelle, less than 10km down the road, there are 7,500 buried, 84 per cent of whom are ‘Known unto God’ only. This is not the first cemetery we pass. At one stage there were literally hundreds of them. These days they have been consolidated somewhat.

We learn how the fabled story of the Christmas football matches (three of them), when opposing troops shared provisions and had a game, only happened in 1914. Things got nasty after that and the generals didn’t like the thought of their soldiers actually seeing the opposition. Heck, they might even not want to shoot them.

The Germans took to putting a jagged edge on their bayonets. This act infuriated the sensibilities of the British and they shot any prisoner on the spot if they had one. The French took to urinating on their blades before combat in the hope of promoting infection.

Meanwhile, Belgian civilians were trying to escape, many to Holland, which remained supposedly neutral; but it eventually put up something unheard of at the time – an electrified fence, and on this hundreds of Belgians perished. The Dutch also bought concrete from the British and sold it to the Germans. It was used to build trenches and bunkers. It’s called profiteering. Some may have other names for it.

Then came the gas. The first recorded use was by the French in a grenade but the bulk stuff was first used here in Belgium. It was stored and ready to use for a month before they actually unleashed it. Had they done their homework they would have known the prevailing winds were in the opposite direction. It was chlorine gas, the first of 17 types that would ultimately be used throughout the war.

The Belgians and Zouaves (mainly from North Africa), copped it first and worst. The Germans gained over 2km then stopped. During the month they were forced to wait, their reserves had been sent to France and they had no more momentum.

The Allies learnt quickly that a moist rag over your face helped a lot with the gas and if that moisture was urine it worked even better. We are shown a picture of some soldiers with female sanitary pads strapped to their faces.

Though we tend to think gas was a German thing, the facts are that the British used 10 times more gas than the Germans ever did and the mustard gas description was appalling beyond my capacity to comprehend. Imagine your lungs slowly disintegrating to the point where you died an agonising death. The gasses that were slow killers were preferred because injured soldiers used up more manpower.

Those who were affected but didn’t die often passed it through to their children in later life, many of whom developed cancer as a result.

This is Part One in a three-part series for Remembrance Day. Stay tuned for Part Two of Ian’s story coming this Sunday, November 8, 2020.

Did any of your family serve in WW1?