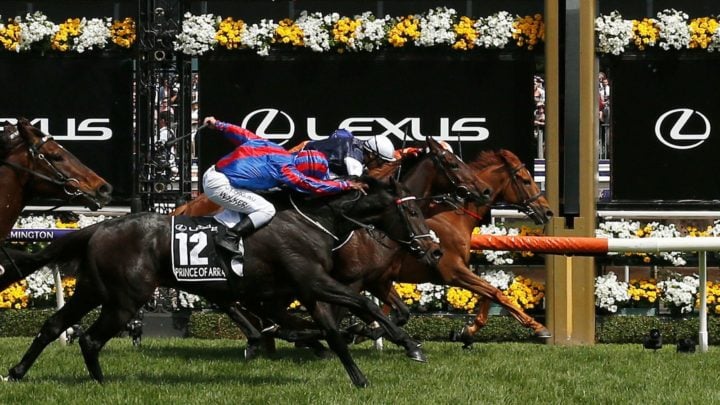 We know it as ‘The Race That Stops A Nation’ and it really does, even if it is only for about 5 minutes, which is something that got me thinking about the Melbourne Cup and all the other ‘great’ races that take place throughout the world and at all times of the year. There’s a whole bunch of them in England, which I suppose would call itself the home of racing, with the Chester track being recognised in the Guinness Book of Records as the oldest in the world, having been built in the 16th century. Then there’s Epsom, the home of the Derby and the Oaks; Aintree, where the infamous Grand National is run; and of course Royal Ascot, to name but a few.

America boasts a few well known races too, including the Kentucky Derby, the Preakness Stakes and the Pacific Classic Stakes, as does Japan with its Fukuyru Stakes, Takamatsunomiya Kinen and Osaka Hai, and even France possesses the Prix de l’Arc de Triomphe and quite a few others. All these races or race tracks are famous throughout the world and all put on a major race at least once a year. The prizes can be bigger than the national debt of many smaller countries around the world.

This of course is the clue to the popularity of the sport — money. It can be money put up as prizes for a major race by large companies, who look on a few million dollars spent this way as being good business, providing good advertising everywhere for the best part of a whole day, not just on the track, but throughout the world in TV coverage — just think how often you saw the word ‘Lexus’ on Melbourne Cup Day, whether you were at home watching on the television or at the track in Melbourne!

Other ways the money comes rolling in at a major race day are simply through the charge for entry, the grossly enlarged prices for food and drink and charges for umbrellas and other incidentals if the weather turns out to be a little less than perfect. Finally, of course, one of the biggest money spinners of all is obtained from the desire of the public to ‘have a gamble’!

There are three types of gamblers: one is the professional, he/she gambles on the horses every day of the year, knows the form book by heart and lays out large sums of money with which they win more often than they lose — the bookies fear them! These gamblers don’t really give a damn about the race itself, they are mathematicians rather than sports enthusiasts, and most race tracks provide a special room for them, where they won’t be disturbed as they work out their odds and the likelihood of a particular horse winning.

The second is the bloke, or his missus, who don’t spend a penny on the horses throughout the year but get this wild urge to put hard cash on an animal they’ve never heard of, “But his name is something like my Gran’s name before she was married, so that must be lucky!” They wouldn’t recognise a form book if it was given to them, they often don’t even go to the track on the day of the big race, because, “there’ll be too big a crowd there”. They avidly watch the race on TV and wonder afterwards what went wrong, so that they lost the whole $3 they had invested, and they say they’ll never waste their money like that again — but they do, next year!

The third type of gambler is the chap who puts a few dollars on, most Saturdays. He has a fair working knowledge of how the form book works and he never looks at the name of the animal — he’s only interested in its number or numbers if he’s indulging in a trifecta or something like that, so he can present it at the counter of the TAB to buy his betting slip. This is your average punter, he doesn’t win a lot of money, but on the other hand he doesn’t lose a lot of money either; he just enjoys a bit of a bet on a Saturday afternoon, and hopes he’ll go home with a bit more money in his pocket than he had when he left.

It’s called the Sport of Kings, though I really don’t know why, except that royalty seem to enjoy getting involved, just as much as their subjects. The only difference is that they have unlimited funds with which to indulge themselves, whereas we have to be a little more careful, or we’ll find there’s not enough left in the kitty to pay this month’s mortgage or rent!

Did you have a bet on the Melbourne Cup? Do you worry about having enough money for leisure and entertainment in your budget?