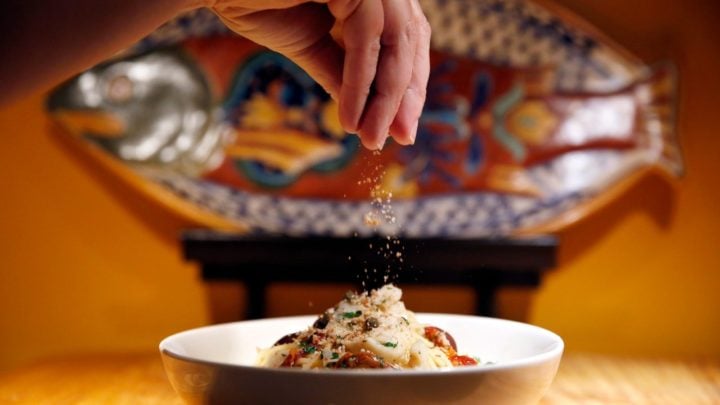 Julie was convinced her mother-in-law was trying to poison her with the meal. Source: Getty Images

It was all so long ago and far away. A much different place, a totally different time, in a Harper Valley of its own making. There was I, a Baby Boomer newlywed, being ritually sacrificed. It was hot, damn hot. At least 40C, rising to 43C (about 120F in the shade, in the old terms). A world then of no air-conditioning. The houses were hot in summer and freezing cold in winter, with only one little heater in the lounge room.

Well, this was summer. Funny how we survived all those years with no cooling in the homes or cars.

Back to this meal, home-cooked in my introduction to the bountiful hospitality of Little Italy. First course, Semolina soup, piping hot. My mother-in-law, an import from Rome, insisted we polish our plates. “Mangia, mangia!” (“Eat, eat!”) No excuses. I was so brave, the weather was sweltering, the perspiration was trickling down my face and back. “Great!” Empty plate, I was trained to be polite.

Her electric range in the kitchen started acting deranged. Much volatile dramatics and yelling later, in came the main course. Tripe in tomato sauce, bubbling hot. I can say here that we can all cook up culinary disasters. I silently contemplated my mother feeding tripe to the family dog. Even the dog would have had second thoughts. My future sister-in-law, dating my husband’s younger brother, was a projectile vomiter. The proud Roman said, “She no like, she spew!” What more could be said? Heave-ho, all over the mother-in-law’s dishes piled up in the sink.

The final cooking coup of all time was next. “Baccala!” Ta-da, more manga! Coming from the classic Oz tradition of meat and three boring, I was ‘into’ trying different cuisines. All I can say is that cooking Baccala is a dreadful thing to do to smoked cod. Definitely no room for desserts after that little lot. Fully sweating, my erstwhile husband led the exodus as we drove off into the blazing hot afternoon, dodging all dishwashing.

Arriving home, I channelled my own nausea and technicolour yawn. Things on the family relationship side never improved. Years later, I still consider that my mother-in-law was trying to poison me! It was only one of the reasons for the eventual D.I.V.O.R.C.E. I suppose nostalgia is not what it used to be!

What was your relationship with your in-laws like? Was there something your in-laws served at meal time that you found hard to stomach?